Confucius Institutes offer courses for adults as well as students 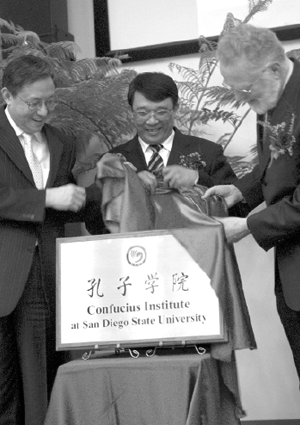 When James McCarthy first decided to learn Chinese, a good friend told him he was crazy, saying that Chinese was too difficult and a waste of time for somebody who had no interest in visiting China.

But he likened his desire to learn Chinese to his friend’s desire to play golf. His friend admitted that playing golf was extremely difficult, that it had no practical use, and that he, too, must be crazy for wanting to learn to play it.

“Perhaps my friend was right; I really didn’t have a good reason to explain why I wanted to study Chinese, but sometimes you have to follow your heart. Sometimes you need to develop an ability, then afterwards take advantage of that ability, and along the way you may discover unexpected things,” said McCarthy.

After studying with a private tutor, McCarthy’s quest to learn the Chinese language and culture eventually landed him at the Confucius Institute at the University of Maryland, CIM, one of 55 such institutes in the United States.

CIM, established in 2004, was the first Confucius Institute to open in the US.

The institute promotes understanding and appreciation of Chinese language, culture and tradition and tries to strengthen relationships between the Chinese and other cultures around the world.

Willis Chambers, a 21-year-old history and English major at Texas A&M University in College Station, Texas, said a university with a Confucius Institute “has significantly more resources and a better insight to create an environment for understanding and engaging with Chinese language and culture.”

“At a university without a Confucius Institute, a student desiring to study abroad in China would have far less opportunities to do so. Chinese professors who either have never or recently have not lived in China are at a great disadvantage with Confucius Institute professors from Chinese universities to teach students current Chinese culture and the practical application of Chinese language,” he said.

Typically the Chinese Language Council International (the Confucius Institute’s headquarters) in Beijing chooses one or two sites for each American state to launch a Confucius Institute, said Rebecca McGinnis, coordinator of events at CIM.

“Reasons the University of Maryland was chosen include our proximity to the nation’s capital and the reasoning that there would be a lot of businesses and populations in the area that might need the Chinese language,” McGinnis said.

In addition to the classes CIM offers to university students, such as its languages classes, it offers opportunities for a variety of organizations in the nearby D.C. area, focused on politics, economics, legal affairs and journalism.

“An example might be if you have a lot of public schools in your area and you can introduce Chinese into the schools, or into after-school programs.”

Texas A&M made a case in 2007 to establish its Confucius Institute, which is a partnership among the university’s International Programs office, the College of Liberal Arts and the College of Education.

“In our case, we looked at the enrollment patterns at Texas A&M in Chinese,” said Dr Randy Kluver, director of the Institute for Pacific Asia at A&M.

Kluver and his colleagues found university students had difficulty enrolling in Chinese classes because of the high demand to learn the lanuage, he said.

“We had such a demand for Chinese, that first or second year students could not even get in the classes,” Kluver said. “They were being filled by students who would soon graduate because they had priority in registration. This created a set of problems for us, in that by the time students were ready for intermediate or advanced Chinese, they were graduating.”

The Confucius Institute at Texas A&M has helped the university to offer more student-courses than before and to offer “a more integrated approach that also sponsors cultural events and study abroad opportunities and so on.”

The growing demand across the state in cities such as Houston and Dallas also helps the university expand its opportunities to the surrounding community, such as offering community classes and pilot programs for rural schools to study Chinese via videoconference.

And the Confucius Institute at Texas A&M gives Chambers the opportunity to expand on both a personal and professional level.

“I have been interested in East Asia ever since I was a young child. In particular, I find Chinese language and culture highly fascinating,” Chambers said. “To anyone at all in tune with the dynamics of current geopolitics, it is hard to miss the importance of an ability to better communicate with China.”

Chambers, who is interested in international diplomacy, said that the program at Texas A&M helped educate him about potential careers involving diplomacy between China and the US.

“There is a level of intimacy when a university has a Confucius Institute,” he said. “I have a trustworthy wealth of information readily available to answer any questions and (the Institute) puts on Chinese cultural performances, hosts intellectual forums and offers diverse other opportunities lacking at schools without Confucius Institutes.”

Such a relationship helped Chambers reach the level of language and cultural proficiency he has today.

“Once I understand China, I can think not only in America’s interest, but also in China’s,” he said.