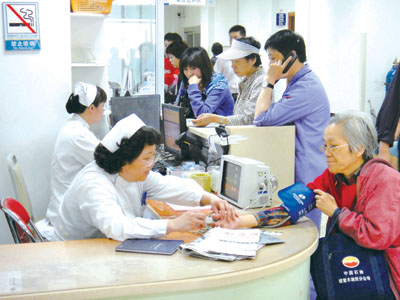 By keying in words like organ transplant or agency, a search engine will display numerous online brokers, which recruit donors and match them with organ recipients.

The agencies are also responsible for arranging the operations in local Three-A General Hospitals, and help forge the necessary documents.

One male agent, surnamed Xu from Beijing said: “We need three or four days to find a suitable donor, whose blood type matches the recipient, and we also prepare one or two reservations for him. Rest assured, we provide all the necessary forged documents and after the operation, there is no relationship between the recipient and the donor.”

Yang Lian, 19, needed money and sold his liver for 25,000 yuan. Yang’s family lived in rural poverty in Henan province, and he decided selling organs was a quick way to make money.

He connected with an online broker, called Wang Zhanwei, who promised “free food and accommodation, with a kidney paid 45,000 yuan, and a liver 40,000 yuan.”

Yang came to Zhengzhou, the capital city of Henen province, and became an organ provider kept by Wang.

After two weeks Wang was transferred along with four other organ donors to Yang Shihai, an agent in Henen, who was keeping 14 providers in Qi xian county, Henan province.

Qi xian county is situated between Zhengzhou and Beijing. The living standard there is very low. Agent Yang rented a three-bed room in a residential area for 2800 yuan for the whole year.

“A and B or O blood types are our most favorite types, because they are easy to match with the recipients,” Yang told METRO during his detention in Haidian detention center.

Yang said he provided the donors food and accommodation. “They lived on the floor in the three-bedrooms, and for each meal, there was meat and vegetables, and I also bought two computers for them to use.”

He said they were free in the daytime and could wander around outside or stay at home and play the computer. After dinner, Yang sometimes chatted with them. “Most of the providers sell their organs for money, and if they change their minds during the period, they can leave at any time, so they don’t have much pressure.”

During the holding period, Yang kept in touch with two other members in Beijing, who were responsible for finding the recipients from Three-A General Hospitals.

Once the recipients were found, they immediately took suitable donors to the relevant hospital to do the operation. Yang succeeded in matching two donors with potential recipients, including Yang Lian.

In March last year, Yang Lian was introduced to a Three-A General Hospital to do the operation, Yang donated 60 percent of his liver to one male patient, surnamed Xie, who paid 150,000 yuan, and Yang received only 25,000 yuan. Of the rest, 40,000 yuan was used for the operation and 85,000 yuan went to Yang Shihai and his two accomplices.

In the country’s first human organ trafficking case, Yang and his colleagues were arrested by Beijing police.

However, Qiu Zhiying, a prosecutor from Haidian procuratorate, told METRO that in Chinese criminal law, human organ trafficking is not as yet a specific crime .

“But if the circumstances are serious, such as the amount of money involved exceeds 50,000 yuan, or if the case involves serious social consequences, lawbreakers face jail terms from five years to the death penalty,” she said.

Many law professors are advocating that human organ trafficking be recognized in law, with the maximum punishment life imprisonment, she said.

The black market for human organs has been rampant in recent years, fueled by the growing number of patients needing organs, and the money to be made from illegal organs.

According to statistics, there are 1.5 million patients in China requiring organ transplants every year, but only 10,000 patients acquire donated organs.

Statistics also show that of the approximately 10,000 organ transplants performed in China last year, more than 3,000 were from living donors, almost six times that in 2008.

“A considerable number of them were from hired donors with fake identities,” said Huang Jiefu, vice-minister of health, also a leading liver transplant expert.

In China, trading in human organs was banned in May 2007. Under the law, human organ donations are restricted to spouses, blood relatives or people sharing family bonds through mutual support.

Otherwise only patients who die and executed convicts can donate their organs after signing donation agreements.

However, after the Supreme Court began to review death penalty cases in 2007, the numbers of executed prisoners has dropped dramatically.