SHANGHAI - China Eastern Airlines Co Ltd, one of the nation's three major carriers, said on Tuesday that it will set up a joint venture in Kunming with the Yunnan provincial government, as part of its effort to explore the southwestern market.

The Shanghai-based carrier said in a statement to the Shanghai Stock Exchange that it has signed an agreement to co-fund an air transportation company with the State-owned Assets Supervision and Administration Commission (SASAC) of Yunnan province. China Eastern will hold a 65 percent stake in the new company, which has a total of 3.66 billion yuan in registered capital. 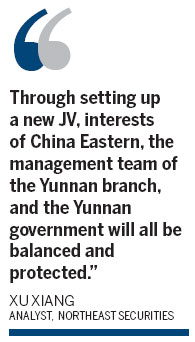 According to the company, China Eastern's investment in the joint venture consists of two parts: 700 million yuan in cash along with 1.68 billion yuan in assets from its Yunnan branch.

Located in southwestern China, Yunnan is renowned for its abundant scenic spots and tourism resources. But 94 percent of Yunnan's area is mountainous, so the cost of building railroads and highways will be very high. Therefore, the development of the aviation sector in the province makes sense, Luo Zhuping, board secretary with China Eastern, told China Daily.

The founding of the Yunnan joint venture will benefit both the local government and China Eastern, said Li Lei, an industry analyst with CITIC China Securities.

China Eastern entered the Yunnan market after taking over Yunnan Airlines from the provincial government in a nationwide restructuring of the aviation industry in 2005. But falling revenues and salary cuts in subsequent years have created tensions among Yunnan Air's staff, culminating in strikes in 2008.

"Through setting up a new JV, interests of China Eastern, the management team of the Yunnan branch, and the Yunnan local government will all be balanced and protected," Xu Xiang, an analyst with Northeast Securities said.

At the same time, as a province lacking solid infrastructure but abundant tourism resources, Yunnan will benefit from a more balanced partnership with China Eastern.

"There is research to show that around one yuan in carrier receipts can generate around 8 yuan in consumer spending in a destination market. Consequently, the local government is keen to promote the tourism industry. While carriers will also benefit from favorable government policies through the cooperative framework," said Li Lei with CITIC China Securities.

China Eastern is going to release its half-year report in late August, and Luo said the results should be positive.

"We are now in a key year for the aviation industry," said Luo. "After a series of mergers and acquisitions, there are fewer but stronger airlines operating across the nation, and we believe the Yunnan company will benefit from the growing demand boosted by China's economic recovery," said Luo.

The equity market didn't respond positively to the news, and shares of China Eastern edged down 0.52 percent to settle at 7.71 yuan apiece on Tuesday.

But the carrier's share gained 0.76 percent to close at 3.98 yuan on the Hong Kong stock exchange.