YICHUN, Heilongjiang - A day after a Henan Airlines plane made a deadly crash landing in Northeast China's Heilongjiang province, the airline company cancelled all its flights on Wednesday for safety reviews, local officials said.

Operations for Henan Airlines, based in Central China's Henan province, would be suspended without a timetable, said Wu Zhenkun, an official with the Henan provincial aviation regulatory committee. Henan Airlines has grounded all flights for the next three days.

The passenger plane broke apart during what the Xinhua News Agency is calling a premature landing at a new Northeast China airport late on Tuesday. The crash killed 42 of the 96 total passengers on board in the nation's worst flight disaster since 2004. The agency initially said 43 were killed but revised the figure shortly after. The age range among those who died was 12 to 55, according to the Yichun government.

Officials recovered the plane's two flight data recorders, or black boxes, on Wednesday, according to Xinhua, but a cause for the crash has not been determined. 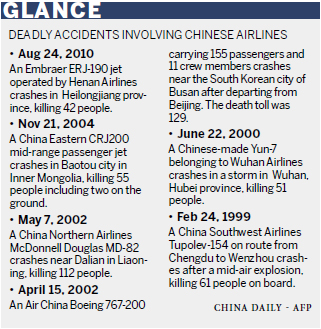 Doctors in Harbin, capital of Heilongjiang province, are currently treating five children who were injured in Tuesday night's plane crash. They are all in critical condition, according to doctors.

The children count among the 15 who were severely injured in the crash. They were all sent late Wednesday from Yichun to Harbin for medical treatment.

Sun Baoshu, vice-minister of Human Resources and Social Security, was among the 54 injured, local officials said on Wednesday.

Officials confirmed that the 60-year-old Sun, together with 17 officials from the Ministry of Human Resources and Social Security and its provincial departments, was on board and headed for a meeting in Yichun, according to Xinhua. Most of the officials survived but suffered minor injuries.

"Sun is suffering from several broken bones as well as injuries to his brain and lungs," said Li Jinchang, a doctor with the Yichun

No 1 People's Hospital, who operated on Sun overnight.

Survivors among the 96 passengers and crew described scenes of horror as they escaped the inferno through a hole torn in the fuselage.

Gao Jianchun, 48, from Jiangsu province, was seated in row 20 of the plane with two colleagues. He said when the plane crashed, it was immediately engulfed in flames. His colleagues both managed to unbuckle their seatbelts to escape.

"I was stuck on the seat, struggling with the belt," he recalled. "The cabin was filled with smoke. I could not breathe. But at last, I managed to free myself from the belt. When I ran to a window, I found my colleagues lying there, choked to death by the smoke."

Gao then saw a gap in the fuselage and jumped out. His lungs were damaged by smoke inhalation.

"When I looked out the window, I couldn't see anything. There were no lights at all," said survivor Xue Xilai. "Soon after that, the plane bounced heavily on the ground and then broke in two."

A man who was sitting in the fifth row said he knew the plane was having difficulties prior to landing.

"There was strong turbulence, and luggage in the overhead bin was falling," said the man, who declined to be named. "Everyone panicked."

"When the plane landed, I felt a jolt, and then the plane seemed to begin to come apart," another survivor told CCTV from his hospital bed. "I tried to escape but there was no way out. Then we saw the fuselage had cracked and we ran through it to escape."

Investigations are underway to find a cause for the crash. Experts from the Civil Aviation Administration of China have ruled out sabotage.

Immediately after the crash, President Hu Jintao and Premier Wen Jiabao called for every last effort to save the injured passengers. They also ordered a thorough investigation into the crash as well as inspections into the civil aviation system to eliminate any safety risks.

Vice-Premier Zhang Dejiang is leading a team sent by the State Council. He flew from Beijing overnight to Yichun to supervise the emergency work.

Technicians from the makers of the plane, Brazil's Embraer, the world's largest producer of regional jets, flew to China to investigate the crash.

The plane's captain, Qi Quanjun, has survived and is in hospital, though he was unable to talk due to severe facial injuries, doctors said. A cabin attendant also survived but the plane's co-pilot and two other attendants were killed.

Most of the casualties were found at the back of the plane. Those who were injured suffered mainly from burns, cuts and broken limbs.