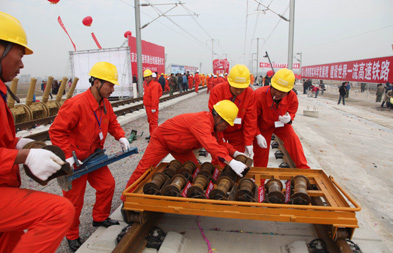 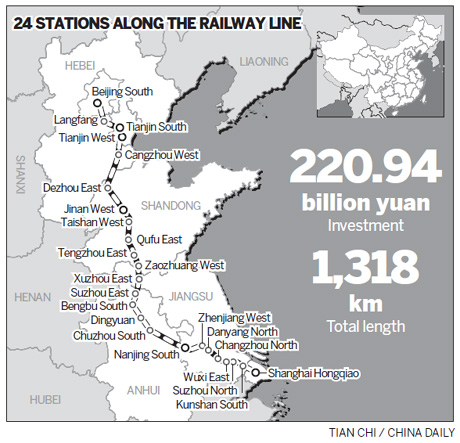 Journey between Shanghai and Beijing to be cut to four hours

"The project has entered its last stage," Lu Chunfang, vice-minister of railways, said at a ceremony to celebrate the latest success in the city of Bengbu, situated in the center of the railway line.

In the next few months, workers will race against time to install the railway's power supply, communications and signal systems, and carry out operation trials to test the line and trains to ensure the railway can open to traffic next year, Wang Yongping, spokesman of the Ministry of Railways, said.

"The core factor that can tell a country's high-speed railway technology is the speed," said Guo Zhiyong, deputy chief engineer of China Railway Siyuan Survey and Design Group Co Ltd, which is in charge of the line's design.

"The future trial operations on this line are expected to beat the speed record of 416.6 km per hour achieved by the Shanghai-Hangzhou railway on Sept 28. And its future operation speed will also exceed that of the current 350 km per hour," he said.

The ministry aims to slash the travel time between China's two largest cities to only four hours, down from the current 10 hours.

The new railway is expected to relieve the existing line of pressures from both passenger and cargo transport, said Wang Yongping.

For a long time, the railway department found it difficult to meet transportation demands along the line. Only 35 percent of the demand for cargo transportation could be met in the past, he said.

With the new rail line ready, the ministry estimates that it can ferry 80 million passengers in one direction annually. This will greatly enhance the railway transport capability between Beijing and Shanghai, as the existing railway will be used for cargo transport, he said.

China now leads the world with 7,431 km of high-speed railways in operation.

The country plans to build a high-speed railway network of 13,000 km by 2012. By then, passengers would be able to reach most provincial capital cities from Beijing in eight hours by train.