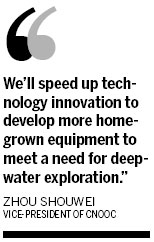 "It marks a milestone that China has become one of the world's largest offshore oil producers after the United States, the United Kingdom, and Norway ... And the marine petrochemical industry will boost the country's energy supply," Fu said.

China's surging energy demand has led the nation's foreign oil dependence ratio to reach a new high of 55 percent in 2010.

"We estimate that 60 percent of China's oil consumption will be imported by 2020," said Wang Jiacheng, a researcher at the Academy of Macroeconomic Research under the National Development and Reform Commission.

Consequently, offshore oil exploration, which is still at an early stage, has become a major factor in quenching the nation's thirst for the natural resource.

He added that about 800 billion yuan ($121 billion) to 1 trillion yuan would be invested during the 12th Five-Year Plan (2011-2015), with the majority going to offshore oil exploration.

China's central government said in its 12th Five-Year Plan that the country should develop and implement a marine development strategy, and improve technical ability and comprehensive management.

CNOOC has tapped into Africa, South America, the Middle East, and Australia for cooperation opportunities in oil and gas projects.

"We hope to integrate into the global economy through international cooperation and support other countries' development," Fu said.

In addition, CNOOC has also tried to develop deepwater oil and gas resources, an area that has a large growth potential.

The company has invested 15 billion yuan into manufacturing state-of-the-art deepwater equipment, including drill-ships and geophysical and survey vessels. The equipment is expected to be used in 2011, said Zhou Shouwei, vice-president of CNOOC.

"The world's offshore oil detection rate is 73 percent on average, while in China the rate is only 12.3 percent. There's still large room for offshore oil exploration, particularly in the deepwater area," said Rui Dingkun, a senior analyst at China Jianyin Investment Securities.

"We'll speed up technology innovation to develop more homegrown equipment to meet a need for deepwater exploration," Zhou said, adding that the company has also focused on deepwater drilling safety.

Zhou, also a top offshore oil exploration engineer, said that based on facts released by the US authorities, the BP oil spill in the Gulf of Mexico last year might have been caused by a series of simple mistakes, rather than technological faults, because the technologies for operating in ocean depths of 1,000 to 2,000 meters have been proven.

He claimed CNOOC is very strict in following technological specifications, so the company can avoid mal-operations.

He believed that after the Gulf of Mexico spill, technological requirements will be higher and regulations will also be tougher, which may lead to higher costs for oil companies and the withdrawal of some players from the offshore business.

"It may also be an opportunity for us," he said.