Road map for promoting the rule of law 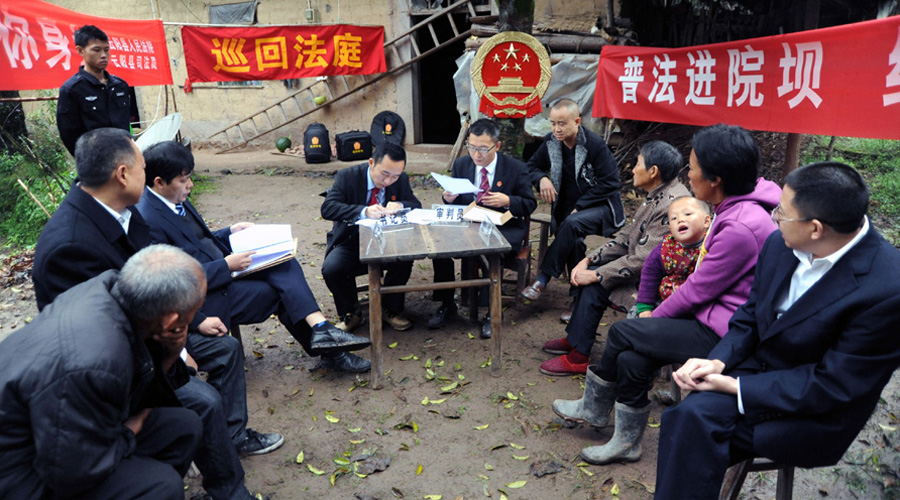 The Fourth Plenum of the 18th Communist Party of China Central Committee held Oct 20 to 23 in Beijing clarified a roadmap to "the socialist rule of law with Chinese characteristics".

The plenum was the most important meeting of Chinese leaders after the Third Plenum of the 18th CPC Central Committee late last year, which specified urgent reforms in 60 key areas of the economy and society.

The Fourth Plenum communique serves as a guide for action plans by government bodies to implement a more robust rule of law throughout the country, which has been largely ruled by power in the past. The plenum clarified many relationships between legislative, administrative and judicial organs.

If the initiative can be carried out well, social friction points will be better lubricated, and tensions will be eased under a new set of rules that add vitality to both to the society and marketplace, and which focus the governments' energy on serving the people.

The Party wants to increase the legal order of society, the market and the government through independent and professional judicial authorities.

China cannot sustain its continuous growth without economic transformation, and that requires changing its model of governance from rule by power to rule by law. Because the Party regards the improvement of people's livelihoods and continuous economic growth as the basis of its legitimate rule, the pursuit of the rule of law is a must, according to the Party's own logic.

Society expects fairness and justice from the law. People receiving unfair treatment from local governments should not have to appeal to higher authority, but to local courts to sue officials who have engaged in malpractice.

The market expects a healthy business environment with fewer interventions and less red tape from the government, as well as fewer monopolies, both State-owned financial agencies and enterprises. Industrial policies and regulations should be made under a legal framework drawing on the collective wisdom of all relevant parties, rather than government officials only. The government should serve the market, not the other way around.

Highlights of the communique:

Establish "the socialist rule of law with Chinese characteristics" and build up the country under it.

3 All people are equal before the law

4 Rule both by law and morality

5 Always refer to the practical national conditions of China

5 Complete internal legal and disciplinary system in the Party

Dec 4 each year is fixed as National Constitution Day. Civil servants will take an oath to the Constitution when assuming their posts.

A third party is introduced to assess matters concerning controversial legislation. Judicial explanations will be strengthened to clarify the laws.

Deputies to the National People's Congress will be encouraged to take part in drafting and amending laws. Third-party agencies might be invited to draft laws and rules.

Citizens will have more opportunities to participate in the drafting of laws. Lawmakers will seek opinions from the public on laws and regulations, and inform the people how their opinions have been processed.

Make laws addressing urgent key concerns, such as anti-corruption and anti-terrorism. Raise the society's awareness of respecting and protecting human rights. Increase the costs of pollution of the environment by a large margin. Complete the framing of laws and rules in the cultural fields.

The administrative organs do not have power superior to the laws. Implement a "negative list" model to restrict government power and eliminate opportunities for officials to trade power for personal profit.

The Supreme People's Court will set up circuit courts, and the country will explore the establishment of cross-administrative regional courts and procuratorates, and seek to allow prosecutors to undertake public-interest litigation. Local courts will be administrated by provincial authorities to avoid city and county governments' interference with their work.

The judicial department's staff should not meddle with the investigation or trial of cases. A mechanism will be set up to record officials who interfere in judicial cases and name them publicly to hold them accountable.

There will be a lifelong accountability system for personnel.

All legal instruments should be disclosed online for public reference after taking effect.

Strengthen supervision of judicial and investigative measures that restrict personal liberty. Prevent extorting confessions by torture and other illegal means of generating evidence. Prevent unjust and false outcomes, and make corrections as soon as possible.

Judicial departments should respond to the society's concerns in a timely manner. Regulate the media's coverage of cases to prevent the interference by public opinion.

Ban judicial staff from receiving payments for whatever reason from the parties or lawyers involved in cases.

There are no laws outside of laws. No one enjoys any privilege that is above the law. The law-enforcement process must itself be lawful.

Government officials should not interfere with the judicial departments' work. Officials who break the law in handling cases must be prosecuted for criminal liability.

Education about the Constitution and laws should extend to the schools of the Party and the government, as well as to the national education system in middle and primary schools.

Social controversies can be resolved through various means of conciliation, mediation and laws. The governments' processing of the people's complaints should be in accordance with the law.

There should be a basic legal services system for rural and urban residents to ensure that all major interest groups have channels to express their appeals and all needy people have access to legal channels to solve their problems.

State power organs, public administration organs and social organizations should have their own lawyers.

Juries will be selected from the society, rather than only from the legal system and the government as before.

6. Rule the Party by law

The politics and law committee is the main organizational channel for the Party to lead political and legal work.

Officials with strong legal awareness should be given preference for promotion.