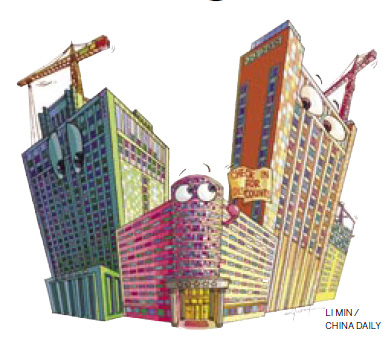 BEIJING - China is witnessing an unprecedented boom in hotel construction that is changing the face of the global hospitality industry.

The country will have the highest number of hotels under construction and room openings in the world for each of the next two years, according to figures released by Lodging Econometrics, the US-based hotel retail estate market analysts. It has some 1,182-hotel projects under construction, compared to just 754 in Europe as a whole.

The leading international hotel chains are all making major investments. Hilton Worldwide, the US-based chain that currently has 17 operating hotels in the country, announced in April it was planning to have 100 hotels running within five years.

This followed a statement by Marriott International, the Bethesda, Maryland-based operation, that it wanted to double the number of its hotels to 90 by 2015.

InterContinental Hotels Group (IHG), based in Denham, Buckinghamshire in the UK, has also revealed it wants to increase the number of its rooms in China eightfold over the next 20 years.

The buoyant mood of the China hotels sector was reflected at the recent Asia Hotel Investment Conference, held in the splendor of The Venetian Hotel in Macao, itself the largest hotel building in Asia.

"I don't think anyone could do it. There are cities that even I have never heard of. The domestic travel market is so huge and (hotel) developers do not reveal their plans until the last minute," he said.

"We are very bullish about the sector as a whole. Just the sheer size of China means you are going to get a lot of activity in the hospitality sector."

One of the big drivers of hotel development in China has been major international events such as the Beijing Olympics, the Shanghai Expo and the 16th Asian Games in Guangzhou last year.

This has led to significant overcapacity in the high-end five-star hotels market, which has led to low room occupancy rates and has driven down room tariffs to a quarter of the level commanded by similar properties in Europe.

Michael Schwarz, associate director of international hotel consultants HVS Global Hospitality Services in Beijing, said it will take time for equilibrium to be restored in these markets.

"There was a lot of development going on prior to these events and a number of hotels have come on stream in the last 24 months and occupancy rates have come down somewhat," he said.

Despite this, some 44 percent of the 323,194 hotel rooms under construction in China - as of the last quarter of 2010 - were in the upscale and luxury sectors with less than 10 percent in the economy sector, according to Lodging Econometrics.

Kevin Murphy, president and chief executive of Asiawide Hospitality Solutions, who chaired and organized the conference in Macao, said while the five-star market might be saturated, hotel developers are often caught in a Catch 22 situation.

"The market should now be led by the budget and mid-range sector but the bulk of hotel development in the pipeline under construction is still in the luxury end," he said.

"Developers are caught in a bind. Because of the rising cost of the land in some of the major cities, the only budget hotel that might work in a major city would be a big one but since the land is expensive, such bigger sites are not necessarily available. It is a bit of a Catch 22 situation."

The hotels market has been transformed over the past 30 years. The first international branded hotel was the Jianguo Hotel in Beijing in 1982 by The Hongkong and Shanghai Hotels group, who now operate Peninsula hotels around Asia.

After a State Council initiative in 1984 to promote the development of international hotels, the famous Holiday Inn Lido was opened in Beijing 1984 and the Sheraton Great Wall a year later, also in the capital.

According to the China National Tourism Association (CNTA), there were some 300,000 hotels in China in 2009 but only 5 percent are officially classified or rated by the government.

Those not classified include not just smaller local hotels but some of the international chains which regard their brands as a sufficient badge of quality.

Rene Schmitt, now 67, managed the Kempinski Hotel in Beijing, one of the first major European hotel brands to open in China in the early 1990s.

He said international hotels in China were then just for foreigners on business.

"You only had foreigners in the hotel. Less than 1 percent was Chinese at that time. Not many Chinese had much money in those days. Now it would be nearly half Chinese," he said.

Schmitt still has offices at the Beijing Lufthansa Center on Liangmaqiao Road, adjacent to the Kempinski, but is now president and chief executive of Beijing Tangram Hotels Management Co. His company aims to build up to 300 mid-scale hotels throughout China over the next five years.

"China has developed so fast, much faster than any other country I have ever seen. It has grown 10 times faster than the US has ever done. There is no other country that can match this speed of development," he said.

One of the interesting sectors of the market in China is the budget hotel sector that is dominated by Chinese brands such as GreenTree Inns, Home Inns, Jin Jiang Inns and Motel 168.

There is much speculation currently as to who will buy Morgan Stanley's 59 percent stake in Shanghai Motel Management, which operates Motel 168.

Both Home Inns and China Lodging Group, which owns HanTing, have submitted bids but they are both believed to be below the $1 billion asking price.

These budget operators will benefit from the phenomenal growth in Chinese tourism.

The number of domestic travelers reached 2.1 billion last year, an increase of 11 percent on 2009, according to a recent report by global management consultants McKinsey & Co.

Humphreys from CBRE Asia said there is too much focus on Chinese traveling abroad and not enough on the Chinese domestic business and leisure traveler.

"What is driving this are the huge domestic travel figures. All the talk is on the 40 million who go overseas and not on the 990 million people in China who travel for leisure," he said.

A leading player in the lower and middle market sector is Singaporean Harry Tan, 55, who owns the China franchise of the US hotels chain Days Inn with his twin brother David and younger brother Ted, 44.

They have opened 35 hotels and plan to have 500 over the next five to seven years.

"There is a lot of room for growth in China still, particularly in the middle market where the customer need is," he said.

"There are still too many five-star hotels. They are often built as part of a scheme because the developer can get more money for offices, residential apartments and retail space if there is a five-star hotel attached."

The ego of developers still remains a characteristic of the market with developers, often with local government backing, wanting to build grandiose hotels with little focus on the prospect of ever making a commercial return.

"I remember one developer coming to me wanting to build a copy of the Burj Al Arab hotel (which claims a seven-star rating in Dubai) by a lake in Hebei province," recalls Schmitt from Beijing Tangram.

"I told him I loved the idea but I said I didn't think anyone would come. It upset him very much. There are a lot of these vanity schemes. You see places where owners have to spend a lot of money just to keep a hotel going because someone made the wrong decision at the outset."

Some international brands, however, are not put off by unusual locations as they try and build a foothold in the market.

"We are coming across new projects all the time," said Humphreys from CBRE. "We were appointed to find an international brand for a development in Dongxing in the Guangxi Zhuang autonomous region, just on the Vietnam border. It was two hours drive to the nearest airport at Nanning. We successfully completed a deal a couple of weeks ago. Things like that are now happening across the whole country."

Humphreys said it would be wrong to characterize modern Chinese developers as being naive or blinkered to the realities of running hotel operations.

"Up to three or four years ago a hotel developer would be looking for a Sheraton, a Hilton or a Marriott and would never look outside the top six brands," he said.

"Now developers are quite well traveled and have stayed in hotels in Australia, the United States or Europe and are much more prepared to be flexible in their choices."

Some major Chinese companies are seeing the advantage of buying stakes in hotel and leisure companies in order to bring their expertise back to China.

Chinese investors have so far not been as adventurous in the European hotels sector as investors from Russia, the Middle East and India.

One of the most high profile takeovers recently has been Indian conglomerate Sahara India Pariwar, run by billionaire industrialist Subrata Roy, buying the Grosvenor House Hotel in Park Lane London for 470 million pounds.

Schmitt at Tangram believes such acquisitions might be one way of making European and other Western hotel chains wake up to the demands of Chinese travelers.

"People complain about Chinese hotels not catering for Westerners even when many hotels only have Chinese customers. If you go to Europe the situation is much worse. The most a Chinese person is likely to get in the morning is miso, a Japanese soup. There is no concept of an actual Chinese breakfast. I have been going on about this for years," he said.

Schmitt is trying to give Chinese customers exactly what they want with his new mid-range Tangram concept.

"There will be no swimming pool because the Chinese never go to the pool. We will have a spa area and karaoke, however, and a self -service laundry. We won't save on mattresses because that is particularly important for Chinese customers. We will also have 42 inch TVs, which many top hotels don't," he said.

With so many rooms in the pipeline, China will be the one place in the world where you are unlikely not to find a bed for the night.

Murphy at AHS said room demand remains strong for both leisure and business travel and the Chinese hotel industry will still be in construction mode for the next two years.

"There may be saturation point in some locations but the mid range sector is still underserved both by the current inventory and also by what is planned over the next three to four years," he said.

Room at the inn

Li Yuchun first came to prominence in 2005 as the Super Girl winner, and since then has become an international star.

The sky's the limit