US car sales picking up 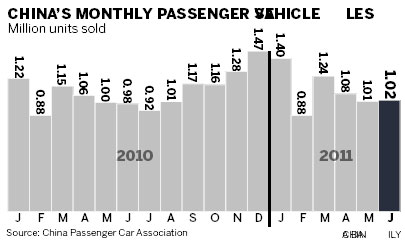 BEIJING - The Chinese car market bounced up in June after consecutive sales drops in April and May, achieving a year-on-year increase of 3.5 percent. US brands GM and Ford continue to lead the market by a double-digit growth, figures show from the China Passenger Car Association released on Wednesday.

In June, sales of cars, sports utility vehicles (SUVs) and minivans hit 1.02 million, a signal that the market is recovering from the ebb during the past two months. The accumulated sales for the first half of the year climbed to 6.3 million, a 5.3 percent increase year-on-year.

US brands have maintained momentum since the beginning of the year. June 1 marked the anniversary of GM's restructure, and the venture with its only Chinese partner, Shanghai GM, gave a beautiful sales record as a gift.

In the first half of the year, the company sold 612,072 cars, a year-on-year increase of 27.5 percent, with help from its sub-brands Buick, Chevrolet and Cadillac.

Mid-to high-end car sales distinguished themselves - 54,100 Buick and 2,722 Cadillac were sold in June, with 48 percent and 50 percent increases year-on-year.

Ford also made sales records. In June it sold 44,442 units, a year-on-year increase of 11 percent. However, its total sales in the past six months amounts to only 274,510 units, dwarfed by GM, the largest foreign automaker in China.

"The Chinese market is an essential part of our global expansion plan," said Joe Hinrichs, president and CEO of Ford. "We will accelerate the distribution network building in China, and bring more products to this market."

Thrilled by the robust market, Ford pledged to bring another 15 models to China by 2015, and double the number of distributors and staff members by then.

Teetering at the edge of bankruptcy several times, Chrysler still hasn't established itself in Asia. In 2010, the company sold only 23,428 cars in China, mostly SUVs. Although Chryslter's goal is to raise sales numbers to 40,000 by the end of 2011, experts said it won't have a breakthrough unless it partners with a Chinese company to manufacture cars locally on a large scale.

The resilience of the Chinese car market cheered up US auto giants. Kevin Wale, president of GM China, predicted in mid-June that the downtrend would only be a bump in the road, saying, "In six to 12 months, domestic vehicle sales will start to increase again."

But figures in June indicate the vitality of the Chinese car market is far stronger than he expected.

The Chinese market is crucial to GM's fortunes. Since 2009, the Chinese auto market has overtaken the US to become the largest market for GM. To better explore this market, GM has also moved its global marketing center to China.

Yan said the sales boom is partly because of the output cut in Japan after the tsunami in March.

"The reduced supply of Japanese cars gave opportunities to US and European cars," Yan said. "With the recovery of Japanese automakers, the market share of US cars might decline to a certain degree."

But Wang Cun from the China Automobile Trading Co said the strong demand for high-end cars in China contributed to the success of US brands.

"With the rising of the middle class, a high-end car such as Cadillac has become a symbol of social status. And the soaring oil price holding back many potential buyers doesn't really bother high-end car buyers, since they can afford it."

90th anniversary of the CPC

The Party has been leading the country and people to prosperity.

An unusual panda is the rising star in Europe's fashion circles