BEIJING - Invited by Chief of the General Staff of the People's Liberation Army (PLA) Chen Bingde, United States Chairman of the Joint Chiefs of Staff Admiral Mike Mullen will visit China from Sunday to Wednesday.

This is in response to Chen's visit to the US in May, and is considered an important step in Sino-US military relations.

At the beginning of 2010, as the US government announced a $6.4 billion arms sale to Taiwan despite protest from the Chinese government, a series of military exchanges, such as US Defense Secretary Robert Gate's visit to China and Chen's visit to the US, were canceled.

However, communications between the two countries' top military officials resumed in the fall of 2010, with Chinese Defense Minister Liang Guanglie meeting Gates in Hanoi in October. During that meeting, Gates also accepted Liang's invitation to visit China in January.

In December 2010, the US Under Secretary of Defense for Policy Michele Flournoy and General Ma Xiaotian, deputy chief of the general staff of the PLA, headed the 11th annual round of defense consultations in Washington DC.

Military relations between the two countries have recently improved. During Chen's visit to the US in May, the two militaries reached six agreements that will enhance exchanges and cooperation. Mullen's upcoming visit could also be considered a concrete step for the two countries to implement the agreements.

Inviting Mullen to visit China shows that Beijing is keen to build a world of security and harmony. Although cooperation plays an important part in military relations, and the two militaries have reached consensus on some major issues, there still remains differences in opinions between them. 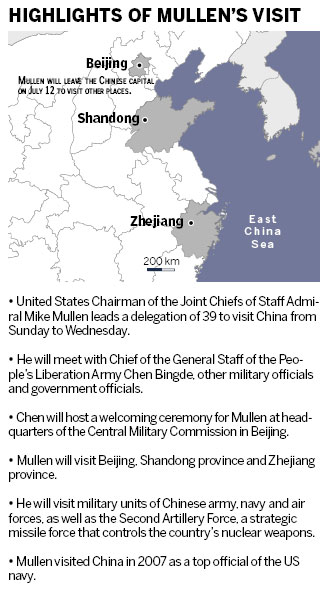 In recent years, as China's national strength has increased rapidly, some have raised suspicions on the intentions of China's effort to improve its national defense system and army. This has not only distorted China's strategic intentions, but also damaged China's international image, affecting the development of Sino-US military relations and political atmosphere.

Given the current international security situation, China's initiatives in the international community is to build up a harmonious world as this is the core value of traditional Chinese culture; and China will never seek hegemony.

Through strengthening Sino-US military ties, China aims to make US forces better understand its concept of "treating others as you would like to be treated", which is a traditional Chinese way of thinking and can present China's attitude toward military relations.

Mullen's visit to China is of a great significance as it sends a positive message to the outside world and is an important step in building a reliable bilateral military relationship. Military ties have always been a barometer of overall relations between the two nations.

China and the US have to cooperate on both international and regional issues. To maintain sustainable and stable development, the two countries need to have mutual respect for each other's core interests and major concerns. They need to properly handle differences and sensitive issues, continue to nurture and enhance strategic mutual trust and expand common interests.

China is willing to make a joint effort with the US under the win-win partnership framework created by President Hu Jintao and US President Barack Obama. Mullen's visit will not only advance military ties but also serve as the promoter of bilateral relations.

The author is military specialist with the National Defense University of the PLA.

90th anniversary of the CPC

The Party has been leading the country and people to prosperity.

An unusual panda is the rising star in Europe's fashion circles