Some conservation groups were not convinced as to the merits of the proposed project. Zhu Laiyou, a senior water official in Jiangxi province, announced that the country's top scientists and ecologists had decided that a dam on Poyang Lake would do little harm to the environment or disrupt wildlife.

"Every conservationist knows that damming Poyang Lake in winter would be devastating to wetlands and migrating birds," Chen Kelin, director of Wetlands International China, said.

"Zhu's remarks made little sense. No water projects that disrupt river flow can be that perfect, can they?" Even the mere mention of the dam over the phone elicited a furious response from Chen.

Zhu, vice-director of Jiangxi's provincial water resources department, said six studies had concluded that the dam, on balance, would benefit the lake and the Yangtze River, and that it would not disrupt wildlife habitat.

"For instance, damming water in the dry season will help fish spawn," he told reporters in a group interview in late June.

Such conclusions soon reignited public wrangling over Jiangxi's plan to build the dam, because consent from scientists would carry weight with the central government.

Questions were raised about the independence and transparency of the studies. Some of those who led the research and others who reviewed it complained that the provincial government was trying to downplay the drawbacks of its water project.

They are urging the decision-makers to fully consider the scientific findings to avert future ecological disasters, especially at a time when China is still struggling to mend the woes of some of its large-scale hydro projects.

Covering an area of 4,000 square kilometers, Poyang is China's largest freshwater lake. So far it has escaped major industrial pollution, thanks to relatively slow economic development in Jiangxi.

The lake is fed by five rivers and connects to the lower reaches of the Yangtze. Lake waters flow into the Yangtze during dry seasons, while in the rainy seasons Poyang is replenished with floods. The yearly changes in water level also help maintain one of the most important wetlands in the world.

Poyang's dynamic ecosystem provides a unique and critical habitat for a variety of waterbirds, many of which are endangered species. About 98 percent of the world's Siberian cranes depend on the lake for survival each winter, according to the International Crane Foundation. It is also home to more than 120 species of fish and 300 species of birds.

Its precious near-natural state is now endangered by the province's plan to build a 2.8- km-wide dam with sluice gates across the narrowest part of the channel that links Poyang and Yangtze. The reason cited by the provincial government is that the lake and surrounding areas have suffered from low water levels almost every winter in the past decade.

"The seasonal decline in winter water level now starts earlier and lasts longer," said Wang Shengrui, who specializes in lake pollution control at the China Research Academy of Environmental Sciences. In an extreme case, parts of Poyang Lake turned into grassland in June as central China battled the worst drought in a century.

Changing climate patterns on the middle and lower reaches of the Yangtze, water storage behind the Three Gorges Dam, and increased water consumption by nearby communities are responsible for the frequent low water level, Wang said.

From 1952 to 2010, extremely low water levels (shallower than 8 meters) were recorded seven times. Six of them came after 2003, when the Three Gorges Dam started to hold back water for electricity generation, Wang said, citing official statistics.

Jiangxi government proposed building Poyang Dam in a plan to set up a Poyang Lake Eco-economic Development Zone, covering 51,200 square kilometers. The cost of the water project is estimated at 10 billion yuan ($1.5 billion).

So Jiangxi invited some of the academicians who had opposed the plan, among others, to research six key aspects of the potential negative impacts of the dam, such as how it would change water quality, wetlands and migrating birds, and aquatic life in the lake.

The studies were supposed to provide scientific recommendations on whether the dam project should go ahead.

The reports were submitted in October 2010, but a comprehensive conclusion is yet to be completed. Meanwhile, Jiangxi water officials have actively pursued support from the water conservation, environmental protection and forestry ministries and related departments.

Controversies about the dam reflect a somewhat common dilemma in China. Provincial authorities are building hydro projects to battle water scarcity, yet those projects could worsen the situation in the long run, said Wang, who worked on one of the six studies.

For instance, the water quality in Poyang Lake's peripheral areas is likely to deteriorate because the sluice gate will slow down, if not completely cut off, the winter water flows that dilute or flush out pollutants.

"Currently the average water quality of the lake stays at fourth grade, and the major pollutants are nitrogen and phosphorus, mainly from domestic and agricultural wastes," he said.

Although that appears to be a poor result on China's five-grade pollution scale, Wang said Poyang's water quality is much better than that of other major freshwater lakes in China. For example, he said, Taihu and Dianchi lakes suffer from chronic eutrophication - an excess of nutrients - that usually causes algae outbreaks during summer.

"Damming the water will definitely change the natural hydrological process, which is too complicated to predict at the moment," he said. "But obviously the pollutants will also be kept in the lake and even precipitated as the water flow is cut off."

A 2010 report by Ramsar Convention, an intergovernmental treaty for conservation and the sustainable use of wetlands, warned that the continued inflow of nutrients (particularly nitrogen and phosphorus) would transform the lake's natural ecosystems.

Too-high levels of nutrients would change Poyang's clear water and submerged plants into turbid water and high concentrations of plankton, which would result in the loss of waterbirds that feed on the submerged plants.

The sluice gates would allow provincial water authorities to adjust the amount of water discharged into the Yangtze. Authorities said the province would hold back water only in dry seasons (from September to March), would keep the level at a maximum depth of 12 meters, and would ensure that the water in Poyang Lake remains clear.

There are also risks that new pollution sources would emerge, Wang said, because more water would be available for industrial or agricultural use. "I'm not saying this will definitely happen, but we have to consider the future scenarios, especially as the Jiangxi government is so desperate for economic development."

The study on wetlands and migrating birds also highlighted the "unique and irreplaceable" function of Poyang Lake, which China has the international obligation to protect, said Chen Kelin, the Wetlands International executive, who reviewed the report.

Poyang Lake National Natural Reserve, which covers 5 percent of the wetlands at Poyang, became the country's first Wetlands of International Importance (Ramsar Site) in 1992, when China joined the convention as a contracting party. (Chen's group is one of the five partners.)

According to the convention, China is obliged to maintain the near-natural state of the site. In the middle reaches of the Yangtze, Poyang is one of the only two sizable lakes that retain a natural connection to the river. All the others are already separated by sluice gates or embankments.

"Damming the lake is going to have an irreversible impact on the wetlands, which Jiangxi officials never mentioned in their pursuit of the dam plan," Chen said. "The most obvious impact will be flooding of the wetlands, which provide crucial habitat for migrating birds, in the dry season.

"Where are they going to stay? Will there be enough space for them to stay? These are the questions Zhu failed to answer when I asked him face to face."

Even as the researchers blame Jiangxi authorities for neglecting the downsides of their plans, some conservationists question the independence and transparency of the six studies.

"The conclusions of these studies are rather vague and ambiguous," said Jiang Jiahu, a researcher with the Nanjing Institute of Geography and Limnology, a branch of the Chinese Academy of Sciences. "I don't think these results, solely funded by the Jiangxi provincial government, can be used as a valid basis by decision-makers at the national level."

He said that independent studies should be carried out to determine whether the project should get the go-ahead.

Complete reports are never made public, and some conservation organizations, such as the Worldwide Fund for Nature, said they are also denied access. "Without publishing full reports, the Jiangxi government can choose whatever is favorable to the project," Jiang said.

The budget of the six research programs totaled about 10 million yuan, all provided by the Jiangxi government, and the studies were finished quickly, said an officer in an international conservation organization who requested anonymity. Reports on the website of Jiangxi's water resources department show the studies were launched on Jan 19, 2010, and "initial results" were available in May 2010.

Wang, who joined the studies, said he received some pressure from the Jiangxi government to highlight the benefits of the dam plan.

"They asked me several times to write in the conclusion that the dam will do more good than harm to the lake, but of course I refused," he said. He stated firmly that his research was not influenced by the funding from the Jiangxi government.

Wetlands International's Chen criticized the premise for the research. "The studies are all based on the presumption that a dam is necessary.

"The best choice is to maintain and protect the natural status of Poyang's ecosystems," Chen said. "The proposed project will bring devastating and irreversible damage to plants, animals and wetlands. The ideal solution should be a no-dam scenario."

Multiple attempts were made to reach Zhu or his office for a response to the accusations that results of the studies were misrepresented and that scientists were pressured to slant their reports in the dam's favor. A staff member who answered the phone asked for an e-mailed request. No response arrived by China Daily's deadline. 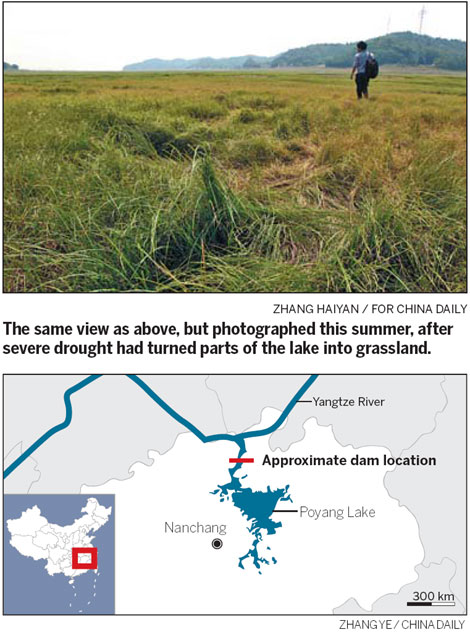 Homebuyers are learning the hard facts of supply and demand: too many cars and too few parking spaces.

In the aftermath of the train crash, more than 20 million micro-bloggers demonstrated power.

An ancient porcelain plate that was accidentally destroyed was an invaluable part of the Palace Museum's collection but not the best piece of its type.

Turning up the heat