A land of rich pickings

Farmers from China are taking the hard, rough road for a brighter future in Zambia

The first time the bandits came, Si Su's wife was home alone. She locked herself in the house and managed to scare them off with a warning shot through the front door.

The couple bought guard dogs to prowl their 80-hectare farm at night. They also put up an iron gate, but that was not enough. 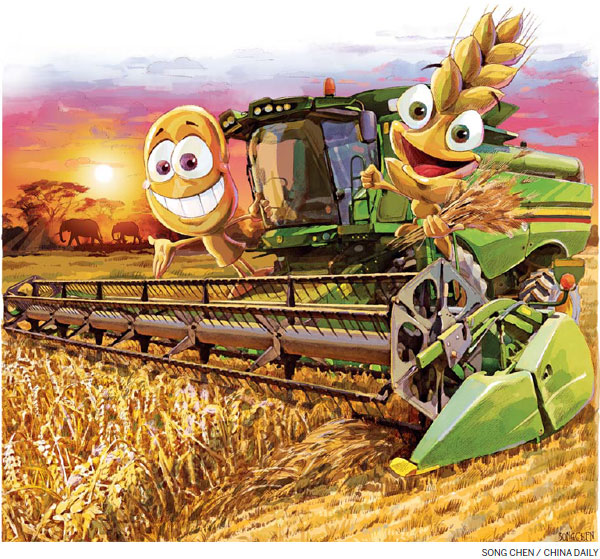 Si casts an eye over the rolling green fields he has farmed on the outskirts of the Zambian capital, Lusaka, for the past decade.

The wheat is just coming through, and it looks like the crop this year is going to be a good one. But the 55-year-old from Jiangsu is not smiling.

"I know of 10 Chinese here who have been killed in about 10 years," he says. He has lost count of how many have been robbed at gunpoint or at the end of a machete.

The front of Si's ramshackle farmhouse is riddled with bullet holes. The bandits have been back seven times, and he believes they will be back again.

"They break into your house and rob you. If you don't give them money they shoot. If you resist, they kill you. My neighbor didn't give them money. They shot two of his Chinese workers, then he gave them the money.

"It's not just Chinese who are robbed, but about 70 percent of the people the thieves target are Chinese. They think the Chinese here make more money, and that's why they target us."

This is the hidden cost of farming in Zambia, Si says.

But he and his wife Zhou Xingxi are not about to walk off the land.

Many Chinese agricultural companies and farmers like Si are toughing it out in Africa because they believe they are sowing the seeds for a brighter future, and are committed to staying the course.

When Si bought his plot 11 years ago, it was nothing but scrubland. The Zambians he recruited had no experience in modern farming.

It was a case of starting from scratch, he says, and of investing everything he had in the farm and those working on it.

Si now has 80 hectares of cultivated cropland, a modern irrigation set-up shipped in from China, 28 Zambian farmhands and two experienced Chinese supervisors. The locals live on site with their families in a rough and ready looking concrete building. Si's home, which also doubles as his workshop and shed, is just as rudimentary.

The interior walls and floors are raw and unfinished. The roof is a patchwork of tin and fiberglass. For Si, his house is proof that the stereotypes about Chinese in Africa are often a far cry from reality.

"Not every Chinese man here is a rich man," he says.

Last year, Si says, he only just broke even. In 2011, during a daylight robbery, bandits tied up his wife at gunpoint and fled with the farm's entire earnings for the year, the equivalent of $75,000.

Barry Sautman and Yan Hairong, professors at the Hong Kong University of Science and Technology, confirm that Chinese are being attacked, and in some cases killed in Zambia.

"Chinese have been targeted by criminals in Zambia for at least a decade," Sautman says.

While racism and an upsurge in nationalism cannot be ruled out as motives, he says, there are a number of reasons for the attacks, including a perception that Chinese are more likely to have cash and are less likely to go to the authorities for help.

"Criminals think that most Chinese have large amounts of cash, and some Chinese did, until recently, not trust local banks with their business earnings.

"Chinese may also be thought of as less likely to call upon police for help, in part because of language problems, but also because the police often seek bribes to perform even basic protective services.

"Many Chinese feel that they are marginalized outsiders who will not receive the protection of authorities even when it is sought.

"Chinese have, however, recently formed a security and crime prevention liaison group that seeks to increase police protection."

Apart from security, there are more mundane challenges, too.

"Zambia's currency fluctuates all the time, Si says. "Yesterday it was (worth) 7.2 (against the US dollar), today it is 6.4; you never know what it's going to be."

But for all the hardships and hurdles, there is reticence in Si's voice when he talks about how he believes Chinese farmers like him are making a difference in Zambia locally and nationally.

Sudanese-born Omer Saeed, an agriculture economist who works for the United Arab Emirates government as part of a team that identifies investment opportunities in Africa, says agriculture is a much riskier investment than mining or infrastructure.

But he also believes it is the most important of the three sectors for Africa.

"Agriculture, in my opinion, will be the main tool for Africa to develop. In most African countries, about 80 percent of the population is involved in some form of agriculture, but it's suffering from low productivity. It is traditional, subsistence farming.

"I think it (large-scale agricultural investment from China) is good for Africa. The importance of investment is not only money; it's a transfer of knowledge and technology, of raising the standard of living for people."

Kelvin Mushoba, one of Si's Zambian employees, agrees the Chinese presence is positive.

With a shy duck of his head, Mushoba wanders up to the farmhouse to chat with Si's wife Zhou, who speaks his local dialect. The 28-year-old Zambian says that without Si, he and his workmates would probably have no job.

Figures from the World Bank suggest that Zambia's labor participation rate for those 15 years or older is about 79.5 percent.

But of that, only 17 percent are known to be "wage and salaried workers". This is despite about 75 percent of those in the labor force being engaged in some form of agriculture.

The figures stack up with what Mushoba knows first hand: Many Zambians are still subsistence farmers who largely live off what they can grow on small plots of land. Locals line the roadsides in Lusaka selling these cash crops, hawking fruit and vegetables and other produce from the bottom of the value chain.

Born in a town about four hours' drive from Lusaka, Mushoba came to the city about three years ago looking for something better than subsistence farming and roadside selling could offer. Si took him on.

"I'm learning modern farming," Mushoba says. "I can change pipes and handle the irrigation now. I worked on a traditional farm and a piggery before (with no modern equipment). It was really hard work. Everything is better here."

Mushoba lives on the farm with his wife and two young daughters. He is paid the equivalent of about $2.50 to $3 a day, depending on the exchange rate.

The wage is low, he says, but concedes it is not terrible. And now he has experience and expertise using modern farming equipment, Mushoba believes he has options and can pick and choose where he wants to work.

"I'm very happy Si gave me a job. If I wasn't happy I would just leave."

About 40 km down the road from Si, a Chinese company, Long Ping High-Tech Agriculture, is also making a go of the farming opportunities Zambia offers. Si has a stake in the operation.

Luo Xueyi, a senior agronomist for the Hunan-based rice giant, says its 342-hectare wheat and soybean farm in Zambia is turning a profit and making a positive impact locally.

At the same time he acknowledges that armed bandits have threatened employees.

"We have the same sort of (security) problems, but not as bad (as Si) because we're further away from the city."

He tries to stay focused on the positives, he says.

Taking into account Long Ping's operations in Ethiopia, Liberia Nigeria and Zambia, it employs about 24 Chinese and several hundred locals across Africa.

The company also runs an agricultural education program in each of these countries, providing lessons and demonstrations of modern farming techniques at several universities and local schools.

"The students we train can go on to get a job on a modern farm," Luo says.

China's Sany ready to act on US govt move