The original goal of US-China sister-city partnerships was to promote better understanding and cultural exchanges, but the changing economic climate in the last few years has placed economic development at the top of the list for many US cities, reports Hezi Jiang from New York.

When entering many US cities, road signs often tell the story: Shanghai and San Francisco; Nanjing and St. Louis; Xianyang and Raleigh; Tacoma and Fuzhou.

They are Chinese-US sister cities, developed through a program that was created 60 years ago by US President Dwight D. Eisenhower, who was a five-star general in World War II, as a way to promote peace through cultural exchanges.

He started Sister Cities International (SCI) to "promote peace through mutual respect, understanding, and cooperation - one individual, one community at a time," says its mission.

Many of the US-China partnerships that initially started under that program with a focus on cultural and educational exchanges are undergoing change. With China's emergence as the world's second-largest economy and the US recovering from an economic recession that started in 2008, many US cities are expanding and leveraging their sister-city partnerships for economic development.

China and the US have 201 sister cities and 44 sister states/provinces, according to the Chinese People's Association for Friendship with Foreign Countries.

According to SCI, the number of US-China sister-city partnerships that have registered with it has almost doubled in the last 10 years from 88 in 2005 to 164.

The first US-China sister cities - Nanjing, Jiangsu and St. Louis, Missouri; Shanghai and San Francisco - were formed in 1979 and 1980, after Deng Xiaoping announced China's reform and opening-up in December 1978.

By 2008, Shanghai and San Francisco had completed 200 projects, including a business-management training program for Shanghai professionals to study in San Francisco, but none of the projects was targeted to direct trade or investment.

"We always encourage all of our members not to just do student exchanges, do not just do sports exchanges, but do municipal government and have it lead to economic development opportunities, because that's what ultimately sustains the relationships," Mary Kane, president and CEO of Washington, DC-based SCI, told China Daily at the second US-China Sister Cities Conference held in Chicago last month. The meeting drew more than 100 delegates from both countries to meet with their sisters and look for new friends.

Adam Kaplan, vice-president of SCI, said that in 2009, after the financial crisis, a number of cities in the organization did not renew their membership in order to cut public spending. However, he said that over the last two years the same ones were coming back.

"There has been significant interest from our members as to how these partnerships can be expanded toward economic development," said Kaplan.

"Many US communities were looking for new ways to generate jobs and trade, and with the international market seeming to hold the most promise, they turned to organizations that were internationally inclined, like sister cities," he said.

While old partnerships added economic development goals to their mission, some new sister-cities were formed mainly based on that intention.

Raleigh, North Carolina, and Xianyang in Hubei province, have been paired since 2009. Their first major event was a business conference in Raleigh, with 21 Chinese government officials and representatives of more than 13 manufacturing companies traveling to North Carolina to meet with local officials and businesses.

James Montague, chairperson of the Xianyang Committee of the Raleigh Sister Cities, said that he and local Chinese businessman John Wei envisioned launching the conference during their first trip together to China in 2008 before the sister-city partnership was even formed.

The Brookings Institution in Washington found that many cities, particularly US cities, came up with new strategies after seeing a rapid growth of foreign investment.

"For a long time through the recession, our growth was focused on domestic consumption, not international trade or investment," said Marek Gootman, fellow and director of strategic partnerships and global initiatives at Brookings.

"Because foreign direct investment has increased dramatically but places realized that they were not capturing the same proportion of foreign investment relative to its growth, the US city regions recognized they need to be competitive internationally, and they need to focus on long-term economic growth, focusing on trading, as opposed to relying on housing development and retail shopping to grow their economies," he said.

Among the US and Chinese sister cities that have successfully added trade and investment to their partnerships are Portland, Oregon and Suzhou in Jiangsu province, and Tacoma, Washington, and Fuzhou.

Portland and Suzhou signed a sister-city partnership more than 25 years ago to develop cultural links and promote arts exchange programs. Now exports and investment have entered the relationship and become significant parts.

"We're geared more toward investment, trade and export," nowadays, Robert Fraser, a board member of the Portland-Suzhou Sister City Association, told the Oregonian after the two cities won a 2014 US-China Sister Cities Award in the "economy and trade" category. "But we're not going to leave behind education and culture."

The Tacoma-Fuzhou relationship is an example of the type of partnership that SCI hopes to replicate. The two cities also won a 2014 US-China Sister Cities Award in the "economy and trade" category.

China ranked No 1 among Port of Tacoma's top two-way trading partners in 2014 with a total trade of $21.9 billion. Wood and agricultural products floated down the Min River daily from Fuzhou, where the Maritime Silk Road started. With technical assistance from its sister, Fuzhou built five deepwater port facilities to secure its position as a key southeastern commercial center.

Last month, Chinese President Xi Jinping visited Lincoln High School in Tacoma during his state visit to the US. The school was selected because of Xi's first visit to Tacoma in 1993 - when he was the party secretary of Fuzhou, which led to a sister-city partnership with Fuzhou in southern China where Xi worked at the time. An exchange agreement was signed in 2008 between teachers at Lincoln High and their counterparts in Fuzhou.

This time, Xi brought ping pong accessories, Chinese books and invited 100 students from the school to China next year: "You will know China better, and hopefully you will fall in love with China," Xi said to cheers.

"It is a wonderful showing of what sister cities can do," said Kane.

Karyn Page of Wichita, Kansas, also has high praise for what a sister-city relationship can do, and still remembers how much she was impressed by Wichita's partnership with Orleans, France, more than two decades ago.

After graduation, she found out that that her high school English teacher worked for the French Sister City Committee. "She spoke French. She had been to Paris a few times," said Page. "It opened up a whole new world to me as a global citizen - that sister city relationships existed."

But now she works on helping cities in Kansas find "trade brothers".

"We shouldn't underemphasize the importance of cultural exposure and education about global diversity for city citizens," said Page, president of Kansa Global Trade Services. "But today, city governments really must prove to their citizens that their taxpayers money are being used for economic benefits."

And she said not all sister-city partnerships can lead to economic relationships.

Taking her hometown of Wichita as an example, none of its four sister-city ties - Orleans, Cancun and Tlalnepantia, Mexico, and Kaifeng, China - were formed for the purpose of economic development. "They are beautiful and meaningful relationships, but they weren't developed because there's an economic growth interest," said Page.

"As Wichita became more interested in outlining its resources with economic development, it actually started to examine its sister-city relationships and tried to really retro-fit these legacy relationships, so they could have an economic purpose."

The city realized that "what we need is not sister cities, but trade brothers," she said.

"There are still economic opportunities with a couple of the sister cities, but they were just not built that way," Page said. "Whenever you try to retrofit something, it's just a whole lot of work."

With that in mind, Wichita, "Air Capital of the World", found Xi'an and Shenyang, two aviation hubs in China. The new trade agreements were built on existing supply chain relationships. According to Page, they have turned to solid long-term relationships with a clear purpose for trade.

Gootman of the Brookings said the best way to reach a successful economic outcome in a sister-city relationship is to develop a very thoughtful trade and investment plan, knowing exactly what a community wants to achieve and outlining a specific set of activities.

He suggested that this work be done by people with knowledge and experience on city-level economic collaboration for best results.

Brookings and JPMorgan Chase launched the Global Cities Initiative in 2012, aimed at helping US cities strengthen their regional economies by becoming more competitive in the global marketplace.

Besides the uncertainty of expanding toward economic development, sister-city partnerships also face old problems that may affect their capability to evolve, with funding always at the top of the list.

According to a new study released by SCI, for the year 2014-2015, approximately 42 percent of sister-city programs operate with a budget of less than $5,000 and 79 percent have a budget under $25,000. More than one-third of the respondents received no financial support from the city government outside of membership dues.

With the limited funding, many programs can only travel to one of their many sisters once a year while sister-city partnerships have relied on constant visiting back and forth to sustain the relationship.

Other challenges include changes of the people in charge, particularly vital when a partnership very much relies on personal relationships, and losing matching standards may lead to potential dormant partnerships, according to representatives from China who attended a session on reviving sister-city partnerships at the Chicago conference.

When membership cities have a specific country or even city in mind, together with SCI, they can try to make it happen, said Kaplan. It sometimes happens when the initiator marries a person from that area.

When membership cities have a vague idea what they are looking for, SCI tries to find a match base on their knowledge and their partner organizations' knowledge. They usually first reach out to organizations in the other country, such as the Chinese People's Association for Friendship with Foreign Countries, or US embassies in foreign lands.

There are no available data on how many sister cities have gone dormant, and there is no cost for cities keeping their inactive relationship on the list.

"It can be awkward to end a sister-city partnership," said Gootman. "Because you are family." 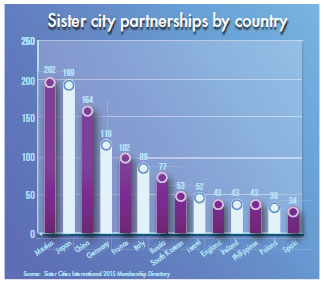 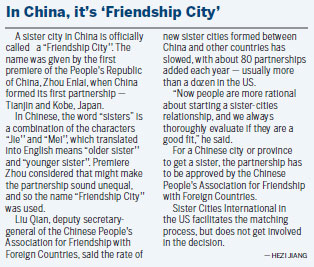 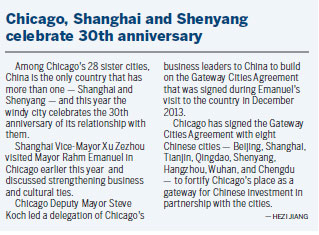