By May Zhou in Houston(China Daily USA)

The work of Ye-Sho Chen, professor and director of globalization at the E. J. Ourso College of Business at Louisiana State University (LSU), goes way beyond the classroom.

He is frequently consulted by the Louisiana Economic Development Agency on attracting Chinese investment, he serves on the international committee of the Baton Rouge Area Chamber and teaches entrepreneurship with higher education institution partners in China and Brazil.

He also keeps in touch with many of his students, some of whom have become entrepreneurs in different countries after graduating from LSU.

Through his connections, business relationships have been forged across oceans and borders.

Chen's passion for turning academic teaching and learning into practical action came from his early experiences. He had a hard time finding work after graduating from Taiwan's National Cheng Kung University as a math major, despite all of the scholarships he had won in college.

"I realized that academic pursuits were often disconnected from society, and I have been pondering this issue since I began my PhD," he said.

In 1985, Chen secured a position at LSU after graduating from Purdue.

"When I came to Baton Rouge, it was very similar to today. Oil prices were low and the economy hit the bottom in 1988 when many factories were closed and massive unemployment followed. I began to pay attention to economic development and how to connect what we teach in school to practice in the real world," recalled Chen.

In 1988, in order to help the state develop and diversify the local economy, LSU established a business incubator on campus, and Chen has been involved with it ever since.

In 2000, Chen was invited to the Chinese mainland to introduce US business models.

"I visited Beijing, Shanghai, Guangzhou and Shenzhen, and found that a lot of Chinese manufacturers wanted to export their products to the US, and I realized that there was a lot of potential and demand. People in China needed to understand how to do business in the US," said Chen.

Chen discussed his findings with LSU leadership and colleagues. With their support, he spearheaded and helped establish the China Initiative at LSU in 2006. Working with Central University of Finance and Economics in Beijing and other higher education institutions in China, Chen undertook the task of teaching the Chinese how to develop their businesses globally.

Under the China Initiative, Chen developed an innovative entrepreneurial curriculum for Chinese small and medium-sized enterprises going abroad. Titled Flying High, Landing Soft, the curriculum has benefited more than a few Chinese entrepreneurs who had ambitions to develop their businesses beyond China.

One of Chen's Chinese students, with the help of the LSU incubator and Chen, formed the company Hitlights, which markets LED lighting in Baton Rouge. It succeeded and continues to grow. Another student of Chen's successfully built a renewable energy company which has transformed from doing business between China and the US to a multi-nation global enterprise.

"Asia-East, a pharmaceutical company in Beijing, was so impressed with our program that they sent people to study with us in 2010. Although they postponed their plans to enter the US market because opportunities in China at that time were greater than in the US, they are now planning to come to the US and are already armed with the knowledge of how to penetrate the US market," said Chen.

When LED selected 10 countries as its top choices for seeking international investment, LSU formed a partnership with a top university in Brazil, and the China Initiative was broadened into an emerging market program under Chen's leadership. Last year, LSU further expanded it to its current globalization program to include all international business, with Chen as director.

Chen enjoys establishing real relationships with his students that last beyond their school years.

"I found that a lot of international students are hungrier probably because most of them came from less wealthy countries. I like to find out what their passions are, what kind of resources they can offer and I try to help them with my connections and resources through the incubator. In turn, they become my resources also," said Chen.

Under the US supply diversity program, large corporations are required to help small companies become suppliers, and Chen said he had helped to connect local suppliers in Louisiana with some Chinese manufacturers over the years. This network benefits Chen's students and business partnerships have been formed from China to the US, Brazil and Africa. 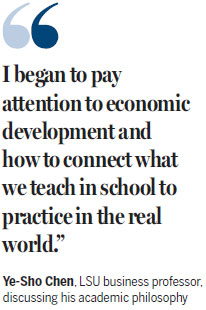 Chen has been on the international committee of the Baton Rouge Area Chamber since 2008, and has often been consulted by the LED when it comes to international investment, especially when Louisiana actively seeks investment from China.

"I often provide translations and pertinent information to them for free, and give them tips when they lead delegations to China," said Chen.

When representatives from Heze, Shandong first visited Baton Rouge in 2007, the mayor of Baton Rouge asked Chen to interpret for them.

"Afterwards, the mayor wanted me to find out what kind of city Heze was. I had served as advisor for the Chinese Student Association at LSU for a few years, so I sent a notice to the association. The next day, five Chinese students showed up to tell me all about Heze. Then I made a report to the mayor," recalled Chen.

Last year, Shandong Yuhuang Chemical from Heze made a $1.8 billion investment in Louisiana to build a large chemical plant complex by the Mississippi River.

"When I connect people, stories happen, and I like to teach business by telling stories," he said.