On a recent cloudy afternoon in a basement in Bay Ridge, Brooklyn, Guan Wenkang and his friends practiced their newly composed melodies.

Guan, a junior at the School of Visual Arts in New York who loves playing drums, said that he had started his own yaogun band a few months ago.

Guan's band consists of one Japanese, one American and there Chinese members. He said his band was diversified ethnically and believes that their music styles will become diversified too in the future.

"A metropolis always gives us international vision and inspiration," he said.

Guan said that New York has many accessible rehearsal rooms, from expensive studios to economical basements, which he said is an "an apparent advantage over students who are studying at home".

Guan said one of his friends at school offered his own basement for them to rehearse free of charge.

"I tried to integrate the strong beat of Chinese drum with the relieving sound of saxophone," Guan said. His ambition was to produce his own interpretation of The Beatles.

Yaogun has become increasingly popular in the last decade.

Eric de Fontenay, the founder of MusicDish*China, an independent music company in New York that promotes yaogun band performances worldwide, became a fan of Chinese rock after a trip to Beijing. He organized an exhibition last month at the China Institute in New York.

De Fontenay said that Chinese music not only includes the classically elegant pipa or guzheng melodies but also incorporates innovative combinations both modern and classical.

"What I initially wanted to do was to let the American audiences learn another aspect of Chinese music in a panoramic view, not a stereotype," he said.

De Fontenay made his first trip to China in 2009, and his first stop was Beijing, which is also the cradle of modern yaogun going back three decades.

"I went into a bar with a sophisticated design in Wudaokou," he said. "I happened to hear a unique yaogun piece, music that took me back to 1980s rock music in New York."

De Fontenay said that he wanted to bring his enthusiasm and feelings of nostalgia for yaogun back home. So he began to develop an idea for a company.

He established the company and organized a series of outbound performances of Chinese rock bands in the United States as "a gradual and steady trial that would yield bigger success".

He established the company and organized a series of outbound performances of Chinese rock bands in the United States as "a gradual and steady trial that would yield bigger success".

Jonathan Campbell, a freelance writer who spent a decade in China as a yaogun drummer, promoter and agent, said yaogun is "not just a Chinese version of rock and roll", but serves as a witness to the journey of Chinese culture in the past four decades. In 1986, Cui Jian, considered the godfather of yaogun, had a big hit called Nothing to My Name.

Rooted in the folk music of Northeast China, the song mixed traditional Chinese musical instruments such as the gong and drum with intense, straightforward rhythms, giving listeners a new take on Western music in the mid-1980s, a period of change and reform.

Cui said his musical style "was heavily influenced by the Western figures" such as Bob Dylan and the Rolling Stones. In the late 1980s, Cui even imitated John Lennon's hairstyle, a cultural experiment on China's social tolerance.

According to research by Fu Boyi, associate professor of musicology at Shenyang University, yaogun music had been continuously consolidating its position as an "innovative product made in China" in the 1990s when several yaogun music companies were established. 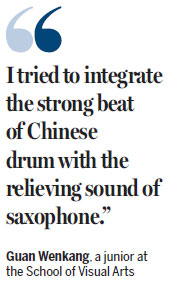 Fu said yaogun has become a lucrative market that offers opportunities for musicians and investors.

"The commercial performances and yaogun music festival have become a major part of their revenues," Fu said. "Derivative consumption such as yaogun tours and yaogun souvenirs bring more margin to the market."

According to the Report on China Outdoor Music Festival Market Development, by the Beijing-based Daolue Music Industry Development Research Center, there were 148 outdoor music festivals (most of which were rooted in yaogun music), almost double the number in 2012.

The report also showed there were approximately 3.1 million yaogun festival-goers in 2014, skyrocketing from 1.7 million in 2012.

Yinming Jin, assistant director of MusicDish*China, said that Chinese rock has become more popular in the US mainly because of the increasing number of Chinese students, who now number more than 300,000.

Jin, a recent alumna from an art college in Pennsylvania, said the total population of Chinese students in her class was 50 but soared to 200 the next year.

"The possible audience was expanding, and why not the market?" she said.

Jin said that the last US performance by Second Hand Rose in Washington had attracted more than 400 listeners, both Chinese and non-Chinese.

"Most of the time, more than 90 percent of our audiences are overseas Chinese students," she said.

Jin said that Chinese students born after the 1990s are more aware of yaogun.

"Therefore, we see a promising future of Chinese yaogun in the US," she said.

Li Shuo, a Chinese immigrant and rock band organizer in New York, said his understanding about Chinese music was mainly based on modern China.

Li started his band in March 2015, but it has consistently changed its focus from ballads in the 1960s style to more rock 'n' roll styles.

Although the band's members are all Chinese, the changes reflect how musical styles adapt, as has yaogun.