China Investment Corporation, the world's fifth-largest country fund, may increase its US investments after moving its North American headquarters to New York from Toronto this week, observers said.

China Investment Corporation, or CIC, announced in a statement on its web site on Monday that it opened the office, saying that it "will serve as a platform to deepen the exchanges and cooperation with local institutions and to further explore investment opportunities for CIC in US and the Americas." CIC said it appointed Zhai Fan as its chief representative in New York Office.

CIC was started in 2007 as a way for China to diversify its huge foreign-exchange holdings -now valued at about $3.44 trillion -- and it has more than $220 billion in overseas assets.

"CIC is pretty much the most important financial investment arm in China," Marshall Sonenshine, a professor of business and finance at Columbia University's business school in New York said in an interview. "I think they want to be closer to American capital, the private equity scene in New York and Wall Street. They may also be interested in making direct investments in companies." 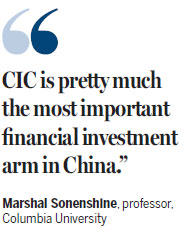 CIC opened its Toronto office in 2011. Reuters, which first reported the closure, said CIC was also looking to trim its exposure to investments in Canadian energy and mining companies, which have slumped as commodity prices have fallen.

Rose said CIC's move to New York should be welcomed, adding: "There is always a risk that politicians or candidates would use the move as an opportunity for political grandstanding or to stoke protectionism."

"The US has always been an open financial marketplace," noted Sonenshine. "If some do try to make some noise it won't be from the financial sector, and I don't believe it will be loud or substantial."