US first lady Michelle Obama prepared herself for an upcoming trip to China by visiting a local school known for its Chinese-immersion program on Tuesday.

The Washington Yu Ying Public Charter School in northeast Washington DC has a dual English and Mandarin immersion program. Its students participated in the welcoming ceremony in January 2011 at the White House for former Chinese president Hu Jintao.

"I have all of these wonderful policy people that help me prep, but I figured since you actually visited some of the cities that I'm going to go to that I would get a good sense of what to expect, what you learned, what you liked, what you didn't like, some of the questions that you think I should ask and be prepared for," the Associated Press quoted the first lady as saying on Tuesday.

Mrs Obama listened to a presentation by a group of sixth-graders on their trip to China, and later followed along as pre-kindergarteners helped teach her how to say "hello", "bye" and "thank you" in Chinese. The children also did a dance using red, hand-held fans, according to the AP report.

"I'm going to look to you guys to be like my advisers on this trip," she said. 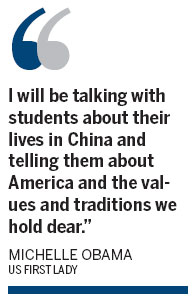 Yu Ying, meaning "nurturing excellence", takes its name from a ground-breaking girls school founded in Beijing in 1911. Established by a former Imperial Lady-in-Waiting, Madame Tzen-Kuei Wang, the Yu Ying School offered classroom education at a time when the centuries-old tutorial system was still the norm in China. The school was a powerful force for education change in China at the time.

The US first lady announced her trip to China on Monday. On her trip from March 19-26 she will be accompanied by her two daughters, 15-year-old Malia and 12-year-old Sasha, and her mother, 76-year-old Marian Robinson.

Mrs Obama said that during the trip she will be focusing on the power and importance of education, both in her own life and in the lives of young people in both countries.

"During my trip, I'll be visiting a university and two high schools in Beijing and Chengdu. I will be talking with students about their lives in China and telling them about America and the values and traditions we hold dear," she wrote on a White House blog.

She encouraged US students to follow the trip, as she will be posting a daily travel blog, complete with videos and photos, and answering questions from children across the US.

The 50-year-old first lady, who graduated from Princeton University and Harvard Law School, has been a strong advocate for education, including encouraging American students to study in China, under the so-called 100,000 Strong Initiative launched by her husband, President Obama, in 2009. She made the call during a January 2011 visit to Howard University.

She noted in her blog post on Monday that China is actually the fifth most popular destination for American students to study abroad and more students come from China to study in US than any other country.