Buying triple over last year in some sectors

Chinese investors in US commercial real estate favor New York City and usually like to sell within three to five years, according to a panel of real estate professionals.

The Expanding Chinese Footprint in NYC Real Estate was the topic of a discussion at New York Law School on Thursday.

To get an idea of how active the Chinese are in New York's real estate market, Costello's company said Chinese purchases of commercial real estate in major US cities have gone from about $3.5 billion in 2014 to $10.2 billion so far this year.

Moskowitz noted that many are eager to compare Chinese investment in New York real estate to the Japanese who were big buyers in the 1980s.

"The difference is that Chinese buyers are purchasing properties in a market that is recovering from a crisis, unlike the Japanese, who bought at the top of the market," he said.

Moskowitz said Chinese real estate investment is "negligible" in most US cities. In New York, it has become a factor because it's easier and more efficient to employ large amounts of capital in the city's property sector.

CBRE's Stacom said many Chinese investors express a desire to see an exit from their real estate investments in three years. She noted that Chinese insurers and some sovereign wealth funds have extended that horizon to five years. 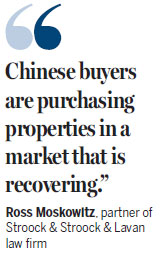 Dvorett said that his company Kuafau - which means a bridge between East and West - is a privately held real estate development and investment company based in New York City that was started by Chinese nationals several years ago.

Initially, Kuafu was focused on the luxury condominium market in New York. "As we look to grow, we are seeking some diversification, and that may include multifamily (properties)," Dvorett said.

Moskowitz wondered if there were any traits that are unique to Chinese real estate investors.

"My partners are Chinese," said Dvorett. "The Chinese culture values more of a direct and open mentality that may include giving some concessions early on."

"My age and reputation works to my advantage," she quipped. She recalled the time a potential Chinese investor pulled her aside after a meeting and asked her if she would invest in this particular proposal. "I reminded him that I represented the seller and then said, yes I would invest in this deal."

Real Capital Analytics Costello said many of the staff members on Chinese firms involved in real estate are young. "While they are a young staff, they do get up to speed quickly," he noted.