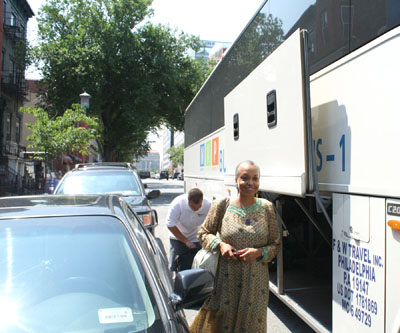 WASHINGTON: The busy intersection of Allen and Pike in Manhattan’s Chinatown is a picture of chaos. Piles of suitcases, backpacks, confused passengers, produce stalls, and Chinese women waving bus tickets are set against a backdrop of idling buses.

Grace Han, 32, lives in the neighborhood and often takes Apex Bus Lines, Eastern Travel and Dragon Bus when traveling. However, she has faced many ordeals to find her bus in the confusion, including the possibility of not getting a seat even though she books her tickets online.

“The stress of not knowing where to pick up these buses and feeling like I’m being shuttled around is frustrating,” she said.

Washington resident Danielle Beaulieu, 23, is a frequent bus rider and has taken MVP Bus Line to New York and used to take Fung Wah to Boston as a student. She said a Chinatown bus is always convenient and reliable for last-minute tickets. However, she — like other passengers — carries the attitude of you-get-what-you-pay-for.

“They drive ridiculously fast and are not very controlled,” Beaulieu said of previous trips. She added that the drivers sometimes take random unannounced pit stops without letting the passengers off, or change drivers halfway.

The fast driving is what gives Chinatown buses one competitive edge. Though perturbing to passengers, they arrive on time — or ahead of schedule — which is not always the case with the mainstream buses.

Thanks to the Chinatown bus market model, total US bus ridership has grown to 631 million passenger trips a year, according to Peter Pantuso, president of the American Bus Association.

“I take my hat off to the curbside operator, for showing if you bring the bus to the customer, the customer may be more available and interested in traveling by coach,” Pantuso said.

A study by the Chaddick Institute for Metropolitan Development at De Paul University in Chicago found that in 2006 bus ridership overall rose 6.9 percent, due to increased awareness of inexpensive curbside operations. Existing Chinatown companies such as Apex Bus Lines (also known as Today’s Bus) doubled its operations to 100 daily departures. Even entrenched commercial operators Peter Pan and Greyhound expanded their services on existing routes, and Peter Pan’s ticket sales had double-digit growth.

During Thanksgiving in 2007, Greyhound manager David Hall was watching masses of travelers boarding the Chinatown buses in Boston. That’s when the idea for BoltBus was born.

“We were seeing a huge demand that we weren’t satisfying,” said Hall, now general manager of the Secaucus,  New Jersey-based BoltBus.

BoltBus, an even partnership between Greyhound and Peter Pan, offers clean buses, free WiFi, $1 seats for the earliest bookers and drop-off points in more convenient locations such as Midtown Manhattan. BoltBus, along with competitor Megabus, has glorified bus travel, especially in light of the recession and volatile fuel prices.

The bus services siphoned off customers from troubled train operator Amtrak and airlines in the Northeast who would otherwise pay $75 to $100 one-way, as well as drivers who pay about $25 in tolls and another $30 to $60 in gas from Washington to New York.

BoltBus, along with other new players in the market such as Britain’s Megabus (a subsidiary of Coach USA), Vamoose, DC2NY, and Washington Deluxe, drew a large chunk of the bus ridership. They are furnished with comfortable seating, clean and functioning lavatories, WiFi, satellite movies, and low prices. Their tickets are available online, eliminating the need for ticket offices and salespeople.

Prices are competitive at $15 to $25 between Washington and New York, but seats are often sold out by boarding time on these operations.

Han tried BoltBus to Washington on her last trip in late June and found it much easier than the other buses she has taken. “From now on, I will take Bolt, even though it’s a little farther away from me and it’s a little more expensive,” she said. “There’s not so much the Chinatown chaos. There’s a sign and a stop that said ‘BoltBus here’. It was clearly more comfortable.”

After its initial success in Chicago and Los Angeles, Megabus began making headway into the Northeast market in late March 2008, opting to make stops in city centers, rather than in metropolitan Chinatowns.

In attempt to keep up with the upstarts, Dallas-based Greyhound, which has been in service since 1914, launched a $60 million campaign in the fall of 2007 to refurbish 970 buses and improve stations with flat-screen TVs, remodeled bathrooms and better signage. It hired more customer service representatives at major stations and created its first national advertising campaign in years.

Although the bulk of the bus travel takes place along the Northeast corridor, increased ridership can be seen in major cities of the Midwest and the West Coast. Currently, Megabus dominates the scene with routes between Chicago and several cities within a four- or five-hour drive, such as Ann Arbor, Michigan.

Industry gets an upgrade

The MVP Bus office is situated in a basement in the heart of Washington’s Chinatown. Inside is a smattering of mismatched chairs, a timetable scrawled on a white board, and three New York City maps taped unevenly to the wall. Passengers cool off with the window unit air conditioner and watch the TV while they wait for their bus to arrive.

Owner Anthony Chang Jr. dons one of the company uniforms — a white polo shirt with the colorful MVP logo. He and his business partner, Teddy Kim, appear organized and neat, like their buses. They are also knowledgeable, professional and polite to customers. Chang jumps from Mandarin to English effortlessly, depending on the passenger.

The two took over the company from Premium Bus, and renamed and rebranded it as MVP Bus. The bus currently travels between New York, Baltimore and Washington, and takes seniors on shopping trips.

It’s a noticeable difference between MVP and the so-called “Chinatown bus,” which is in fact several bus companies, launched and typically operated by Chinese immigrants, whose routes travel from Chinatown to Chinatown around the Northeast. Most operate right off the street, from ticket sales to waiting — so MVP’s waiting area is actually a small luxury in the Chinatown operations.

“We’re a Chinatown company, but we try to brand ourselves and have a consistent image and consistent level of service,” Kim said.

The Chinatown buses are famous and infamous for offering bare-bones, no-frills, low-cost travel. Rather than rent bus depot space, they pick up and drop passengers off curbside. They became referred to as “curbside carriers” by the Federal Motor Carrier Safety Administration and by the American Bus Association.

They have also earned reputations for cutting corners in safety and hygiene; having inaccurate information on websites; nonfunctioning or filthy lavatories on board; and rude service and disorganized operations.

But they may be forced to change their ways, with all the competition for cheap travel in a recession — and with the entrance of mainstream operations such as BoltBus and Megabus. To ensure their survival, the Chinatown bus companies are offering more amenities, better service, and more strategic pick-up and drop-off points. But they’ll need to re-strategize their current businesses to maintain a competitive edge.

People like MVP owners Chang and Kim use the reputation for fast, inexpensive travel to their advantage. “There’s a history and image that I don’t think any money can buy,” Kim said. “Affordable buses. Frequent schedules. People associate that with Chinatown buses.”

The Chinatown bus phenomenon started in the late 1990s when the first and currently largest company, Fung Wah, began shuttling Chinese restaurant workers in vans between Boston and New York Chinatowns for $1.50. Soon Chinese college students began riding with them. Then non-Chinese college students began hopping aboard. More companies were launched, and an industry was born.

Major players such as Greyhound and Peter Pan could not compete. They had been used to pricing passengers at $40, compared to a Chinatown bus which could go as low as $10. The companies lobbied hard in Boston and in 2004, and managed to force the Chinatown buses to move to the South Station bus terminal.

“People need to play on an even playing field,” said Robert Schwarz, executive vice president of communications for Peter Pan Bus. Boston is the only city that requires buses to operate out of a terminal. “If you operate on the street, you don’t pay anything. If you operate out of South Station, you pay a fee,” Schwarz said. “What’s the fairness if one operates on the street and one operates out of a terminal?”

The Chinatown buses had experienced negative media related to gang-related violence, a troubling safety record and increased surprise inspections. In 2002, an individual named Chen De Jian of Dragon Coach drove a bus into a man named Lun Diu Chen of New Century Bus. The hit shattered his pelvis, according to the New York Times. Shortly after, Chen was found dead with three bullet wounds in his back. Violent confrontations arose, some with gang affiliations, bringing a darker perception to the Chinatown bus business.

Other negative media did not help. In August 2005, a Fung Wah bus headed to New York caught fire in Connecticut. All 45 passengers managed to evacuate without injury before the bus was engulfed in flames, but they complained the driver didn’t know how to handle the emergency. And in September 2006, 34 passengers were hurt in another Fung Wah bus crash in Massachusetts that police blamed on speeding.

Such media attention regarding safety and violations of the Americans with Disabilities Act brought increased surprise inspections of the Chinatown operations and a more wary mainstream audience. This snapped several of the Chinatown bus companies into shape: in 2007, the Federal Motor Carrier Safety Administration reported that 18 of the 22 curbside bus companies in the Northeast received a satisfactory safety rating. Three had conditional ratings, and one was still unrated.

Despite these incidents, the Chinatown bus companies still hold strong value for many passengers, and experts say the Chinese owners are working to improve their customer service and image.

Jimmy Chen, president of IvyMedia Corp in Boston and the founder of booking engine Gotobus.com, believes the Chinese companies can succeed and co-exist with the mainstream market without losing their original audience. Chen launched Gotobus.com in 2002 as an online service to Chinatown bus companies. Speaking the language of e-commerce propelled the Chinatown buses toward the mainstream traveler.

Chen said many of the Chinese owners have limited language skills, but are learning to partner with those who can help. He cites MVP as an example of a next-generation Chinatown bus. Owner Chang is Chinese-American, raised in the United States, speaks fluent Mandarin and has an American business sense.

Chen pointed to Eastern Travel as another example. Eastern Travel hired David Wong, who is Chinese-born, American-educated and has an MBA, to run its operations. Wong turned Eastern into a smooth operation for Chinese and non-Chinese passengers alike. He suggested, rather than operating solely in Chinatown, to add a more convenient drop-off and pick-up point in Midtown Manhattan.

Megabus acquired Eastern Travel and most of Today’s Bus, except for its routes south of Washington (which continue under Apex Bus) in early 2009. Megabus merged the two operations under Eastern’s name because of its strong customer base and reputation, said Megabus president Dale Moser. This provided Megabus a strong base with the Chinatown market, while operating in the mainstream area as well.

While it appears that the answer to survival is to Americanize, others say it isn’t necessarily the main focus. The Chinatown buses aren’t the only ones vulnerable to changes.

“We’re all constantly changing,” Moser said. “There are new and different ways to achieve and deliver transportation services. We’re trying to create new customers who historically deemed bus travel as a lesser form of transportation. It’s a whole image.”