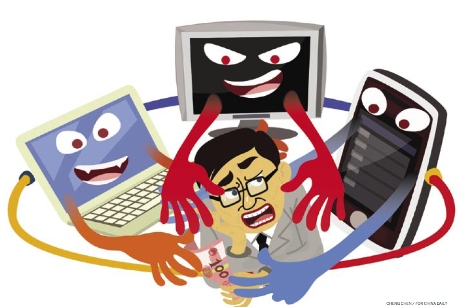 BEIJING - Debate is starting to rage in China over the benefits of a proposed nationwide project to converge the broadcast, telecommunication and Internet networks.

On July 1, the government named 12 cities and regions - including Beijing, Shanghai and Shenzhen - to be part of a pilot program that will allow users to make telephone calls, surf the Net and watch television through one cable or wireless gateway.

The trial will last until 2012 and will focus on connecting the broadcasting and telecom networks, the government announced earlier. Authorities also vowed to achieve a comprehensive integration in line with the project by 2015.

"The convergence will bring lots of benefits to the public and make lives more colorful and convenient," said Zeng Jianqiu, the head of Network Convergence Research Institution and a professor at Beijing University of Post and Telecommunications.

"People will be able to use TV to make calls and search information online or use cell phones to watch TV."

But Xiang Ligang, a telecommunication expert and CEO of cctime.com, a portal of information communication industry, said that because of the imbalance of China's economic development, network convergence may not be good for users.

"Whoever invests in the convergence will want to make a profit and any loans taken to finance the project will need to be paid back. And ultimately, the end user will pay for that," Xiang said.

The cost of the convergence will come from the government and the companies involved.

Wu Hequan, from the Chinese Academy of Engineering, said the convergence involve costs of up to 688 billion yuan (about $100 billion) over the next three years.

However, Zeng disputed these figures and said today's technologies are good enough for the convergence and the cost will be much lower than what has been reported. 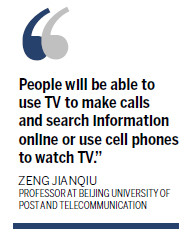 "The report of the State Council has clear statements which requested operators not to add burden to the users," he said. He believed users will get better services at lower prices.

For example, a home in Beijing with cable TV, Internet and cell phones would spend about 320 yuan (about $47) a month. After the convergence, the bill is expected to be about 250 yuan.

Xiang is also worried that after the convergence, TV and telecommunication services would come in one package, which many overseas operators are doing.

For people who want TV, internet and phone calls, it may be a good deal. But many low-income people may not want to pay for things they may not need, such as Internet and a landline.

"Could the convergence save money or will they pay more?" he said.

Zeng said network convergence is not operators dividing a cake, but making a bigger cake together.

"The point is not about competition, but giving benefits to the public by cooperation with each other. With a bigger cake, all operators will have change."

Some residents in the pilot cities are not looking forward to the convergence.

Zhao Yu, 27, an accountant in Beijing, used a DVD-quality set-top box for cable TV few months ago from one of the companies involved in the convergence program.

"It was free trial, but the box had a problem after a while. The repair fee was so high that I gave up the box," Zhao said.

"The convergence sounds nice but I hope I would not be forced to pay more for it."

Wang Lijian, the head of the press office in the ministry of industry and information technology, said would not take any interview about the network convergence.