No real reason for home prices to drop

BEIJING - For many Chinese, owning cheaper homes - in the hope the central government's most severe macro-control measures implemented in mid-April will succeed - may be only a dream.

A drastic decline in home prices is not what local governments, as well as developers, banks and those who already own more than one home, hope for.

These can explain why developers, which have earned a lot of money because of skyrocketing home prices since the beginning of last year and the belief that demand is still strong, are reluctant to cut prices.

Home investors with sufficient money prefer to rent out their homes at higher rentals rather than putting them for sale, in anticipation that prices will continue to rise.

Many government officials and economists say the macro-control measures have achieved initial results, based on the fact that homes sales in many areas have shrunk, but figures from the National Bureau of Statistics show the growth momentum in home prices is by no means weak.

The bureau said in a statement last week that home prices in China's 70 major cities declined by 0.1 percent in June on a monthly basis, the first such drop since February last year. But it still grew 11.4 percent year-on-year.

Home prices are still growing and beyond the reach of many ordinary Chinese. 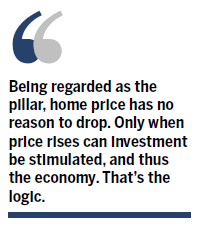 Xu Shaoshi, Minister of Land and Resources, said early this month that home prices may drop in the fourth quarter, triggering anticipation that the next round of tightening measures may be in the pipeline.

But Xu's remarks was immediately interpreted by Wang Yulin, a top official from the Ministry of Housing and Urban-Rural Development, who explained that what the minister means is that the central government will continue to implement the existing measures. There will be no new measures, he said.

In fact, Wang's ministry has already send groups to investigate how effective the macro-control measures have been, fearing the measures might hurt the healthy development of the real estate industry.

Warnings are also frequently heard on the market that the macro-control measures should not be long-term.

Zhu Zhongyi, vice-chairman of China Real Estate Association, said long-term shrinkages in home transactions due to the macro-control measures are unfavorable for the development of the real estate market, an important propeller of the national economy.

The measures, which have resulted in many people adopting a wait-and-see attitude, have reined-in rapid home price rises in some cities, he said.

"A stable market needs a stable expectations," he said. "The short- and mid-term measures could not solve the problem of stable and sustainable development of the real estate market."

Yao Jingyuan, chief economist of the National Bureau of Statistics, said although higher home prices bring in worries of a real estate bubble, the sector's role as a pillar of the national economy is unshakable.

Being regarded as the pillar, home price has no reason to drop. Only when price rises can investment be stimulated, and thus the economy. That's the logic.

The successful macro-control measures should help stabilize the home prices and the real estate industry as a whole, he said.

Gu said last year's rapid rise in home prices was mainly due to insufficient supplies, too much money supply and booming speculative money.

Since the basics are still there, can anyone expect a price drop in the coming months?