WASHINGTON - Citing threats to its economy and to national security, the US often blocks investment projects from China, especially from State-owned enterprises, and limits China's investments to a limited number of sectors.

These actions by the US harm the interests of both Chinese and American companies. The ongoing case involving China's State-owned Anshan Iron & Steel Group is one example of US investment protectionism.

In May, China's fourth largest steelmaker, also known as Angang, agreed to pay $175 million for a less-than-20-percent stake in a rebar plant that Steel Development Co, a US startup, is building in Amory, Miss.

Rebar is commonly used in concrete and masonry structures. The project, which will produce an annual 300,000 tons of rebar, is relatively small in capacity and will not hinder the American steel market, according to an Angang senior official. 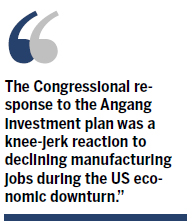 A bipartisan group of 50 lawmakers signed a letter to US Treasury Secretary Timothy Geithner, expressing concern that the investment threatened US jobs and national security.

They said that Angang will take advantage of massive government subsidies and may distort their domestic market. The letter asked the Treasury to investigate whether or not Angang's investment could be blocked.

Chinese analysts said that the Congressional response to the Angang investment plan was a knee-jerk reaction to declining manufacturing jobs during the US economic downturn.

"It is also partly because the Democrats need to win the support of the steel unions for the coming mid-term election in November," said Haipei Shue, who has been following US-China trade issues for a decade on Capitol Hill.

The protests over Chinese investment projects began in 2005 when China National Offshore Oil Corporation (CNOOC) flirted with acquiring Unocal Oil Company. The bid met unexpected political opposition from the US, who viewed the proposed merger as a threat to American security.

For the same reason, last year, a Chinese mining company backed out of a deal to invest in a Nevada gold mine after a US government review raised security concerns since the mine was about 100 kilometers from a US Navy training base.

China has been investing a great deal of money in the United States, but most of the money goes to bonds.

By June of last year, the total volume of Chinese companies' outbound direct investment (ODI) in the US reached $3.1 billion while the US ODI in China was $61 billion, according to China's Ministry of Commerce.

But China has clear interests beyond bonds, according to the latest Heritage Foundation's China Global Investment Tracker. It documents nearly $200 billion in global spending by Chinese firms outside bonds between January 2005 and June this year. An additional $130 billion in attempted investment failed for various reasons

"Chinese money is pouring into this country - but all to the federal government. This is a very poor way to create jobs, among other things," Derek Scissors, Asia economic policy expert at the Heritage Foundation, told China Daily.

"The misallocation is not due to Chinese investment choices, however, but misguided American political objections."

He said that there is a very narrow range of sectors directly important to national security that should be off-limits.

"Most of the political opposition goes well beyond that. Such opposition is not well-considered and the US should accept more non-bond investment," he said.

The economist suggested that investment access can be protected only by a bilateral investment treaty.

"In addition to making many needed demands on Beijing, the US should be able to offer transparent access to most of the American market. Such an outcome will prove a useful diplomatic tool and, more importantly, will help the American economy," he said.