The company that also produces beverages and baked goods in China has named them Innovation Challenge and Innovation Award in the hope of attracting talent.

The final of the First Tingyi Innovation Challenge was held in Peking University. Business plans on production, marketing strategies, business services and public welfare from 20 teams were selected to compete in the final by a panel of business leaders and scholars.

A chance to study in Japan's Waseda University will be provided to 19 of the participants from the final 20 teams selected by an additional test. Each of the 19 can get more than 400,000 yuan in the form of scholarships. 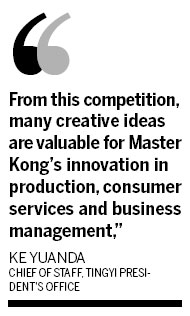 The First Tingyi Innovation Challenge started in January in 2010. Participants worked in teams with a maximum of five people to prepare business plans based on professional knowledge of market research and analysis, project design and risk management. They came from China, including Hong Kong, Macao and Taiwan and included some who were studying in other countries such as the US and Canada. More than 300 business plans have been received by organizers.

A team of National Taiwan University graduates won the first award and 50,000 yuan. They put instant noodles into two separated parts of a bowl, like Chinese two-taste hotpot. That allowed friends with different tastes to share food together. It also meant disposable bowls need not be used. A nutritional side dish was provided with the meal.

"It was a surprise to get the first award. When we decided to join the competition, we just hoped to contribute to public welfare. Our innovation can help reduce pollution from disposable containers and improve people's health," Chen Xiujing, a member of the first award winning team told China Business Weekly. "We did have many disagreements and argued all the time during the project. But after we formed a closer friendship and our innovation and practical abilities have been improved."

"Innovation can be everywhere in daily life. From this competition, many creative ideas are valuable for Master Kong's innovation in production, consumer services and business management," said Ke Yuanda, the chief of staff in Tingyi president's office

In October 2009, Master Kong, together with Waseda University, announced the joint investment of 180 million yuan to provide high value scholarships, the largest scholarship project in Waseda University's history, for five years to support 425 outstanding students in China to pursue advanced studies in the world's most prestigious universities.

Master Kong has been one of the most creative and recognized consumer brand names in China's fast-moving consumer goods market. According to ACNielsen, based on sales, in December 2009 the group was the market leader in instant noodles, ready-to-drink teas and bottled water. It had, respectively, a 54.6 percent, 48.4 percent and 19.6 percent market share.