Raising a glass to exports

BEIJING - Offering a toast to guests with good quality liquor is a way of showing respect the world over.

In China, the drink of choice is traditionally Moutai, made from fermented sorghum and named after the town in Guizhou province.

The fiery beverage, which varies in alcoholic volume from 35 to 53 percent, has been used on official occasions in feasts with foreign heads of state and distinguished guests visiting China. It is the only alcohol presented as an official gift by Chinese embassies in foreign countries and regions.

Moutai's popularity as a drink with which to raise a toast has caught on at celebrations abroad with no other Chinese associations, prompting its biggest distiller to identify a gap in the market.

Yuan Renguo, general manager and board chairman of China Kweichow Moutai Distillery Co Ltd, now plans to set up marketing networks in France and Japan as a first step toward a massive overseas expansion of the spirit that retails upwards of 800 yuan a bottle.

"Moutai is China's name card and, as such, it should be introduced to more foreign people," said Yuan. "France and Japan are two places where there are many Chinese people who can help to increase the liquor's popularity among their foreign friends."

Moutai's main customers include politicians, celebrities and hedonists. It accounts for 12.6 percent of the distilled spirit market in China, the vast majority of which is made up by its far cheaper relation, baijiu.

Yuan is optimistic about business in the French market. He says there are more than 10,000 Chinese restaurants in Paris and, as such, if just one bottle of Moutai wine is sold in each eatery, that will mean 10,000 in sales and big profits. Last year, 526 tons of Moutai were exported to foreign markets. This was a 14 percent increase on 2008 figures.

Yuan plans to push his Moutai into the United States, Canada and Australia within the next five years.

Other Chinese distillers are adopting a different approach to the demands of internationalization. Many are transferring company stock to large foreign liquor producers that can then bring out the Chinese liquor on international markets.

Paul Walsh, chief executive officer of Diageo, said his company would cooperate with its Chinese partners to bring their white spirit brands to the world.

Moutai first came to international fame in 1915 when it won a gold medal at the Panama-Pacific Exposition in San Francisco. This year, Moutai makers have been using the Shanghai expo to expand foreign market opportunities. Moutai paid 100 million yuan to become the international event's sole spirit provider, with more than 80 kinds of the drink available for tasting.

"Moutai's internationalization will definitely originate from the export of Chinese culture. The Shanghai expo is providing an opportunity to advertise Chinese and Moutai culture," Yuan said. He is expecting an 8 to 10 percent increase in sales this year as a result of the expo sales promotion.

If the expo is Moutai's launch pad to the wider world, diplomatic feasts held by the Chinese government are the drink's political platform. The international fame of Moutai has mostly been spread by foreign leaders coming to China. Ever since 1949, when Mao Zedong announced the establishment of the People's Republic of China, the drink has played a role in international relations, being used as a toast for leaders and representatives of foreign governments. One of the most popular reports is that Moutai was served to US President Richard Nixon during the meal at which China established diplomatic relations with the US in 1972.

Former US diplomat Henry Kissinger, who paved the way for Nixon's visit, once remarked to former Chinese paramount leader Deng Xiaoping that "if we drink enough Moutai we can solve anything".

Another well-known anecdote recalls the meeting between the comic western actor Charlie Chaplin and Chinese Premier Zhou Enlai. Both men were known to be able to drink large amounts of alcohol. Chaplin took a liking to the Chinese brew and called it the drink of "real men" in front of the press.

There is an old Chinese saying that states: "An emperor's daughter does not need to worry about not being able to get married." A sales strategy was previously not needed for Moutai because it was always in short supply.

That stopped being the case in 1998 when the brand suffered a big slump in sales because of intensified domestic and overseas competition and the Asian financial crisis.

It was in that year that Yuan Renguo was promoted to the top position in the company.

Only 700 tons of the drink were sold by July 1998 against an annual target of 2,000 tons. Yuan recognized the need for drastic action.

He recruited 17 salesmen and launched a nationwide promotion of Moutai. He also held a party at his home for all sales agents. During the eveninh he made the toast "that friendship multiplies joys and divides grief" and added: "I hope everyone here can help Moutai get over its current difficulties and drink the spirit that shares woe."

By the end of 1998, 2,000 tons of Moutai were sold, a 13 percent increase on 1997. Yuan's corporate tact is said to have played an important role in the company's recovery from financial crisis.

Moutai diplomacy had been born. These days, Yuan exchanges toasts with every distributor who comes to Moutai, so long as he is in residence. 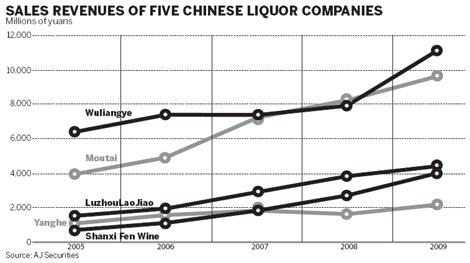 distributor in Sichuan province, said, "Although I'm not a big business partner for them, I get respected in Maotai town."

Yuan, who joined the company at the age of 18, has always insisted on diversification. In recent years, he has overseen the launch of Moutai beer, Moutai red wine and Moutai health tonic industries.

"Moutai is going to establish its own fund company to invest in more industries such as real estate, energy and packaging materials," Yuan told China Business Weekly.

The company was reported to have bought a 300 million yuan stake in the Bank of Communications three years ago. That is now worth 1.4 billion yuan.

Huang Wei, an analyst with China Jianyin Investment Securities, said he believed diversification was the way forward for the liquor industry. "Diversification is the breakthrough for large wine companies to find new profit growth due to the fierce market competition and declining profit," he said.