NEW YORK - A radio reporter approached me in Bryant Park last week, asking my view on the upcoming price hike of the MetroCard for New York City's subway and bus system.

Due to a mammoth budget shortfall, a 15-percent fare increase will be imposed. Two subway lines and 37 bus routes in the Big Apple have already been eliminated and over 700 bus workers, mechanics and station agents have lost their jobs. More layoffs are expected in the coming days.

New York state, the nation's third-biggest state by both population and GDP, is so broke that it has also cut aid to public schools, reduced the number of police officers on duty and raised taxes on cigarettes in a bid to close its $9.2 billion deficit.

Governor David Paterson has been struggling for months to have state lawmakers pass a new budget for the coming year, but it still seems no easy job.

New York is not alone. California, the nation's largest state in terms of population, has been facing bankruptcy or has been on the verge of bankruptcy for years.

The Hollywood star governor Arnold Schwarzenegger is battling a deficit of more than $19 billion this year. According to the Standard & Poor's, California's credit rating is the lowest among 50 US states. At a rating of A minus, it is in the same rank as the African country of Libya.

Many other states, such as Illinois, Michigan and New Jersey, are facing similar situations.

Most of these states have to raise taxes, cut public spending and sell state assets in order to fill the shortfall. The disruption to public life has been enormous when vital institutions such as social welfare agencies, schools, police stations and firefighters are operating at limited capacity.

In Ohio's Ashtabula County, a judge advised residents to carry a gun because the number of deputy sheriffs has been approximately cut in half under a tight budget. 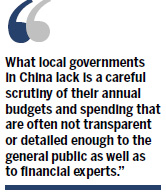 While financial crisis has made many US states look like a collection of third-world countries, local governments in serious debt in the largest developing country of China look completely different.

Liu Jiayi, auditor general of the National Audit Office, revealed in his report to the National People's Congress a month ago that local government debt of the 18 provinces, 16 cities and 36 counties in a study had reached a staggering 2.79 trillion yuan, or about $410 billion, by the end of 2009.

Though many local governments have a deficit higher than their annual revenue income, the local governments are not announcing any plans to rein in their budget, claim bankruptcy or complaining about their credit ratings being lowered, which result in higher costs to borrow money.

Unlike their US counterparts, no government workers in China are losing their jobs, or have had their salaries cut or are asked to take long no-pay leave because of the financial crisis of the local governments.

All of them seem to rest assured that the higher-level governments will bail them out and write off their bad loans.

In fact, this is not completely bad compared to the US, since shutting down government agencies and cutting down some vital public spending, such as on schools, police force and firefighters, is way too disruptive to local life.

That said, what local governments in China lack is a careful scrutiny of their annual budgets and spending that are often not transparent or detailed enough to the general public as well as to financial experts.

On dealing with the bankruptcy of local governments, China and the United States can learn from each other.