If you thought you knew everything about Lehman Brothers, you thought wrong. Investigative writer Vicky Ward has gone into print after being secretly passed the diaries written by the firm's top executives. Among unexpected bombshells she has unearthed is that Dick Fuld was not the leader everyone thought. From her unique vantage point as the only person outside Lehmans who has the 2002/2003 diaries recorded by Lehman's senior staff - the major players of the preceding 20 years - she reveals the story no one has told in The Devil's Casino: Friendship, Betrayal, and the High Stakes Games Played Inside Lehman Brothers. 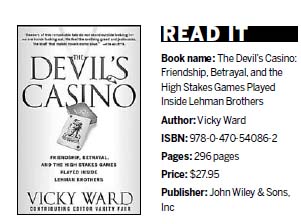 Ward landed interviews with many previously off-the-record insiders, executives, spouses, and major dealers in the financial industry. Bringing together new information and comprehensive research, she gives us a multi-layered, riveting portrayal of modern Lehman Brothers and its two real leaders: one who brought the small firm roaring to ascendency - and then was brutally betrayed and erased from its corporate history - and another who ruled the firm like Robespierre ruled France - but under a smiling facade while the company crashed and burned.

Rich with fresh anecdotes and the psychological underpinnings that propelled Lehman's triumphs and demise, The Devil's Casino is engrossing, revealing and true, and provides an unprecedented perspective into how unexpected and phenomenal success changed good people over time, stretched the boundaries of friendship and ethics, fed backstabbing, destroyed a life, and ultimately brought down America's oldest investment bank.

Vicky Ward presents a finely shaded portrait of a company that rose with the glory and bravado of Icarus only to descend burning in flames not so much from a sun, but from a match lit from within.