Androids to rule the world

BEIJING - Android-based handsets may beat Apple's iPhone to dominate China's cellphone market, according to an executive from a mobile Internet firm. 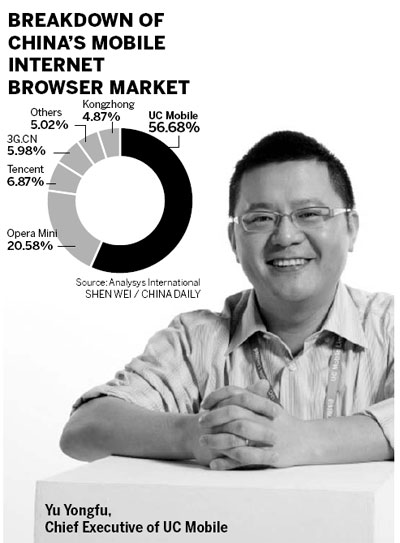 "Apple products are very fancy, but their popularity is limited to a very small group of consumers," said Yu.

He is the second Chinese entrepreneur since last month to publicly express pessimism about iPhone's development in the world's biggest mobile population.

Last month, Liu Chuanzhi, chairman of PC maker Lenovo, said that Apple is missing a tremendous opportunity in China and places the blame squarely on Apple CEO Steve Jobs, according to a report in the Financial Times.

According to research firm The Nielsen Company, Google's Android handsets accounted for 27 percent of all smartphones sold in the United States in the first quarter of this year, while iPhones made up 23 percent.

But in China, sales of iPhone are about twice to that of Android-based phones, according to Pang Jun, an analyst from research firm GFK China.

Android is an operating system for mobile devices such as cell phones and tablet computers.

A report from AdMob, a mobile advertising network, said there were already more Android devices than iPhones in China in April, partly due to the poor sales of official iPhones in the country.

Yu estimated that shipments of the iPhone and iPod Touch in China are less than 4 million, including those sold the gray market. But Android-based handsets will soon take the helm, "because almost everyone in the industry supports the system," Yu said.

He also predicted that mobile phones will surpass personal computers as the preferred device for Internet users in China by the end of 2011.

Established in 2004, UC Mobile is the biggest developer of mobile Internet browsers in China, accounting for nearly 60 percent of the market share, according to figures from domestic research firm Analysys International. The company's flagship browser, UCWEB, supports both Android and iPhone systems.

Yu said on Monday that China's mobile Internet market will see explosive growth in the next couple years as more users are turning to 3G services. That will give great opportunities for many Chinese firms as users in the United States and Europe are not as interested in using cell phones as those in Asia.

Venture capital firms Ceyuan Ventures and Morningside Group invested about $10 million in UC Mobile in 2007, while Alibaba Group and Nokia's venture capital fund also have a stake in the company.

Yu also said on Monday that the company plans to aggressively expand its presence in the international market and is open to strategic partnerships.