'Upstarts'in China may lead to free fall of moral standards

NEW YORK - On the east coast of the Pacific, 40 billionaires joined The Giving Pledge - launched by Microsoft founder Bill Gates, his wife Belinda and investor Warren Buffett - to give at least half of their wealth to charity.

Gates and Buffett are hoping their campaign can produce $600 billion from the wealthiest from inside and outside the United States.

On the western side of the Pacific, Hong Kong tycoon Li Ka-shing has pledged to donate more than HK$10 billion ($1.29 billion) over the next 30 years.

But on the Chinese mainland, it was farce after farce staged by upstarts.

Yu and Tang Jun, former Microsoft China president who was accused of fabricating his education background, obtained their PhDs from the university.

After also being exposed for several alleged business frauds in the past weeks, Yu, in an Aug 3 press conference unveiled with the beating of drums and gongs, vowed to take legal actions against 15 news organizations.

He demanded 50 million yuan ($7.4 million) compensation from each of them. "I will defeat them financially and let them know the feeling of rather to die than to live," he said.

In his defense of Tang, Yu told millions of TV viewers that the truth about Tang's diploma is not important as long as he is successful in his career.

Just one day after Yu's conference, Guo Degang, a cross-talk performer who shot to stardom four years ago, was in the spotlight, not for his show but for describing his student who beat up a Beijing Television journalist as "national hero".

He wanted to reward his heroic student with a "solo show". 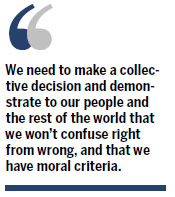 On stage, Guo also derided his neighbors who accused him of encroaching public land as "a bunch of the dirt poor" and journalists "worse than prostitutes".

The consequence for Guo's outrageous remarks is serious. His show has been declared "vulgar" and his book and videos have been taken off the shelves from major bookstores in Beijing after authorities issued a notice.

I am not a fan of government interference in such matters. But just as the failure of market mechanism calls for government intervention in the financial crisis, the free fall of the moral standards in our society has caused such a crisis that only strong and immediate intervention can halt.

While Guo's words were condemnable, the cheers and applause from the audience after his "dirt poor" and "worse than prostitutes" comments are more disturbing, as are the comments of support for Guo left by some netizens on discussion boards and the patrons who continue to go to his performances.

It shows that many cannot tell right from wrong. That is the real tragedy of all the recent farces.

We have to ask why Tang still dare not to make an apology. Why would he dare gibe at the public questioning as media hype at his high school alumni gathering in Changzhou, Jiangsu province?

Why would Yu dare to publicly defend such a scandalous diploma and feel no shame at all in front of the millions of viewers?

And why would Guo dare to use such insulting words on his neighbors and journalists?

I am not calling for a war on these individual performers and businessmen. But as a nation, we need to make a collective decision and demonstrate to our people and the rest of the world that we won't confuse right from wrong, and that we have moral criteria.

We should not let moral degradation to prevail in our society.

Our message should be loud and unambiguous.