The dream of wireless communication so real it is like talking face to face has been realized at the Shanghai Expo, where the latest in telephony shows what fourth-generation (4G) mobile communication will be like.

The International Telecommunication Union has selected a TD-LTE version known as LTE-Advance as one of candidates to be the international 4G standard. The final decision is expected in October.

LTE-Advance has a good chance of wining the standard competition, said Wan Yi, director of mobile communication research at the Ministry of Industry and Information Technology (MIIT). 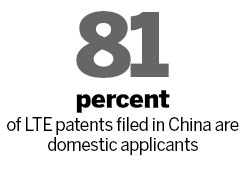 The LTE standard has wide support from international operators as well as manufacturers along the industrial chain, Wan said. He estimated it will be used in 80 to 90 percent of the future 4G market.

Another candidate for the standard, known as 802.16m, has also gained support in the high-tech community.

The enormous potential rewards in 4G are fueling a fierce competition in patents. "In spite of current appearance of peace, all signs indicate that a storm is coming," said Wang Lei, assistant researcher at the State Intellectual Property Office.

Some 81 percent of LTE patents filed with China's intellectual property offices have come from domestic companies and institutions, according to recent statistics.

Zte tops the applicants with 113 filings, with Huawei ranking second and Datang Mobile in third place.

But the small percentage of foreign applicants for LTE-related patents does not reflect their actual competitive edge, Wang noted.

Many foreign companies have applied for patents through Patent Cooperation Treaty (PCT), a unified system that protects inventions in each of its signatory nations, which numbered 142 by the end of 2009.

China has been a contracting state with the PCT since 1994.

More than 1,000 applications for LTE-related patents from abroad have been filed through the PCT, but have not yet been processed in China.

Wang noted that Chinese companies and institutions should accelerate their development of LTE patents to prepare themselves for the coming battle.