BEIJING - The topic of pirating creates a large spectrum of reactions. Some damn it while others love it. It is aggressively prosecuted in some countries while many others turn a blind eye or worse. In the weeks before the Beijing Olympics, China put on its mean face toward pirating. I was lucky enough to get a glimpse of the action.

I was with some friends at Beijing's Sanlitun bar street. Among things like pirated beer (yes, that's correct and it gives you quite the stomach ache), it has been a hotspot for foreigners to buy pirated DVDs.

As we turned a corner to walk up Sanlitun's main street, we ran straight into a very visible crackdown on pirated products.

A uniformed policeman threw handfuls of pirated CDs into a growing pile outside a popular shop. I stood with my friends, amazed at how big the pile was getting. A few minutes later police emerged, leading a group of the store's young employees to a waiting police van.

We moved closer as another group of police started emphatically stomping on the pile of discs while another filmed their exploits.

That was before the Olympics. A few weeks ago I went into that same shop and they had all the latest pirated DVDs available for sale. Why such the difference?

Anyone who has spent a prolonged time in China knows that pirating is pervasive here. It's not just CDs and DVDs; it is clothes, iPods, books and just about anything else you can think of. Long before many brands even enter China, pirated versions of their goods are being sold there. 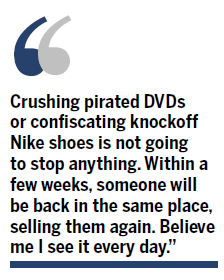 The Chinese refer to it as the shanzhai culture, the art of imitation, but not because they dislike foreign companies or want to try to dry up a certain brand's business in China. No it's simpler than that the fakes are cheaper. There is no reason to buy a real DVD for 40 yuan ($6) when you can buy one in Beijing for 5 yuan. Or better yet get it online and watch it for free.

No matter how many slogans are posted or how hard foreign companies push their claims of intellectual property, if cheaper pirated products are available, many Chinese will continue to consume them.

Given this situation, it is really an uphill battle trying to eliminate pirated products in China. Some Chinese and foreign companies have made some ground in their crusade for intellectual property rights but such campaigns can hardly reduce demand.

Even if by some miracle, China was able to eliminate pirated products from its streets, there is still the whole digital world to consider.

With 400 million people surfing the Web in China, how can you realistically assure that digital pirating is not taking place? I pity those who try along with their pocket books.

Media moguls the world around would love to turn China into a land of fairytale intellectual property rights harmony, but that is just not going to happen.

They should learn from the failed American prohibition. No matter how many barrels of moonshine they broke open, bootleggers always found a way to give the people what they wanted.

I know that prohibited alcohol and pirated DVDs are vastly different products, but the same thing ensures their popularity: A never-ending demand from society.

Foreign companies looking for solutions to property rights concerns in China should really look outside the box for solutions. Some like Google already are, with its widely popular www.top100.cn site where Chinese consumers can download countless music tracks for free.

The only way to beat piracy in China is to make it obsolete.

Crushing pirated DVDs or confiscating knockoff Nike shoes is not going to stop anything. Within a few weeks, someone will be back in the same place, selling them again. Believe me I see it every day.