Hangzhou - China Executive Education Corp, a China-based executive training company designed to fit the needs of Chinese entrepreneurs with classes and seminars to improve their expertise in marketing, sales, public speaking, leadership, motivation, and a variety of business management skills, has announced several key developments in the strategic expansion of its business model. The developments include increased geographic scope due to the company's entry into new provinces, as well as an increase in demand for its proprietary executive training services. 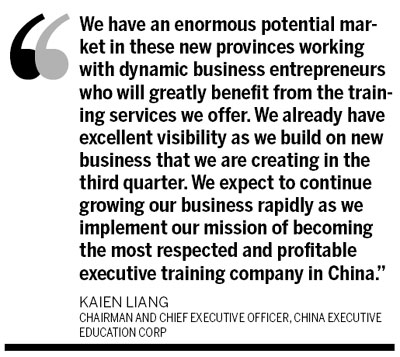 Formally established in 2009, China Executive Education has focused primarily on the market for executive and professional training in the area surrounding Shanghai, the largest trade and finance center in the Chinese mainland. In June 2010, however, the company began making inroads into additional markets by establishing two new province-level franchises in Shandong and Jiangsu provinces, which border Shanghai to the north. Shandong is China's third most populous province, with a population of 94.2 million, while Jiangsu is its fifth largest province, with 76.8 million inhabitants.

"We are very pleased with the recent progress we have been making in our efforts to grow our business into these new markets," said Kaien Liang, chairman and chief executive officer of China Executive Education Corp. "Entering Jiangsu and Shandong, two of the largest provinces in China, is a major step in gaining visibility and establishing brand recognition for our popular training courses. Aided by the addition of our new franchises at both the city and province levels, we expect hundreds of potential clients from these new regions to begin attending our monthly sales presentations in Shanghai.

"We have an enormous potential market in these new provinces working with dynamic business entrepreneurs who will greatly benefit from the training services we offer. We already have excellent visibility as we build on new business that we are creating in the third quarter. We expect to continue growing our business rapidly as we implement our mission of becoming the most respected and profitable executive training company in China."

China is the world's largest education market, and the professional training segment in particular has shown rapid growth in recent years. The number of small and mid-sized businesses in China is forecasted to reach 50 million by 2012, representing an estimated market size of roughly 40 million potential clients for China Executive Education.

China Executive Education Corp, operating through MYL Business, is a fast-growing executive education company in China that offers comprehensive professional training programs in Hangzhou and Shanghai, two prosperous and commercial cities of China. Through open-enrollment training programs, including proprietary training courses and featured lectures, the company provides Chinese business executives with a variety of business training such as sales, marketing, leadership development, and highly effective personal skills development focused on decision-making skills, negotiation skills, public speaking skills and people skills. The training courses include a seven-course package for CEOs, as well as 22 other business development courses. It is also one of very few business education training companies in China with the reputation and resources to attract world-renowned masters such as management guru Tom Peters, leadership guru John Maxwell, and relationship guru John Gray to China. Since formally launching in April 2009, the company has provided its training programs to 2,874 Chinese business owners and executives from a broad range of industries.