Envisions 100,000 hybrids and 50,000 purely electric vehicles in next five years

BEIJING - Dongfeng Motor Corp, one of China's largest automakers, announced last week that it will invest 3 billion yuan over the next five years to develop energy-saving and new-energy vehicles.

According to its plan, Dongfeng will work on technology for hybrid and pure electricity vehicles while continuing to improve the efficiency of its internal combustion engines.

It named 16 key projects in the plan, including research and development into purely electric cars, hybrid buses and some key components.

The company started research work on new-energy vehicles in the late 1990s. It then made concept cars powered by electricity as well as light-duty buses powered by fuel cell.

In May this year, it provided 100 Dongfeng Fengshen S30 BSG hybrid sedans to the city government of Wuhan.

Now Dongfeng has more than 400 energy-saving and new-energy vehicles on the streets in Wuhan, Shanghai and Zhengzhou for a field trial.

The company's green vehicles used at the Beijing Olympics in 2008 and Shanghai Expo this year have received wide acclaim. 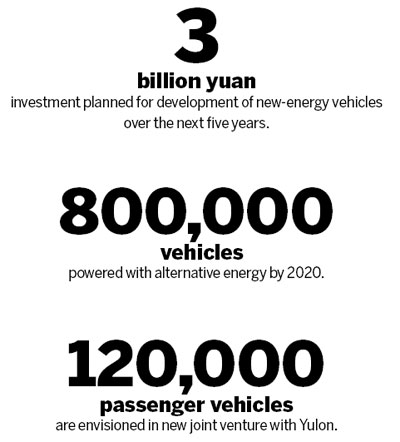 It has set a goal to produce 100,000 hybrid vehicles and 50,000 purely electric vehicles by 2015. It wants production and sales of new-energy and energy saving vehicles to account for a fifth of Dongfeng-brand passenger vehicles by then.

With plans for 800,000 new-energy vehicles on the market by 2020, the company expects them to have competitive strength with traditional petrol-powered vehicles.

The Chinese government has taken a strong stand to support development of new-energy vehicles. It began a pilot program in June in five cities to provide subsidies to customers of purely electric and plug-in hybrid vehicles as well as automobiles with conventional engines smaller than 1.6 liters.

The government is also considering a plan to invest 100 billion yuan over the next decade to accelerate development in the sector, according to recent media reports.

German automaker Volkswagen plans to introduce its hybrid Touareg to China next year and produce Golf and Lavida electric cars in 2013. The Lavida electric is under development by Chinese and German engineers at the Sino-German joint venture Shanghai Volkswagen.

The company announced last week that the National Development and Reform Commission approved the plan at the end of July that envisions production facilities in Hangzhou with annual capacity of 120,000 passenger vehicles and an equal number of engines in its first phase.

The joint venture will have a lineup of SUVs, MPVs, cars and purely electric vehicles. The first product is likely to hit the market in the middle of next year, said Dongfeng.

The 50-50 partnership with registered capital of 1.55 billion yuan will at first produce an SUV or MPV with the nameplate Luxgen, a current Yulon brand, said recent media reports.

As one of the biggest auto groups in China and partner of Nissan, Honda, PSA Peugeot Citroen and Kia, Dongfeng could be a strong collaborator for Yulon to tap the mainland market.

Dongfeng sold 1.28 million vehicles in the first half this year and has a full year target to deliver 2.22 million units.

CEO of Yulon Group Kenneth Yen was quoted in local media reports as saying automobiles from Taiwan will get the opportunity to step on the global stage only by first entering the vast mainland market.

Fewer than 300,000 autos were sold in Taiwan last year compared with 13 million on the mainland.

Some analysts estimated that Yulon's new vehicle sales could surge to 150,000 units a year from a current 30,000 units through the huge market demand on the mainland, according to reports of Taiwanese media.

Opposing views say it will be difficult for a new and little-known brand like Luxgen to grab a share of the highly competitive Chinese auto market.