Why all the fuss in New York?

NEW YORK - If you believe Americans are preoccupied these days by major issues such as the economy, the unemployment rate, the Iraq pullout and war in Afghanistan and the tension in the South China Sea and Yellow Sea, you are wrong. The Islamic cultural center to be built two blocks from Ground Zero has become the top national debate, drawing massive attention from politicians to ordinary Americans.

On a rainy Sunday morning at two sides of the future culture center site at 51 Park Place, I witnessed two camps holding posters and shouting support and protest of the Islamic center.

While freedom of assembly is a US constitutional right, what surprised me was the high turnout of people against the Islamic center on Sunday. However, this simply conforms to several recent public opinion polls that show a majority of Americans and New Yorkers oppose the Islamic center project.

Two people standing behind the construction happen to be the leaders of the country and of New York City. US President Barack Obama said that Muslims have the right to build near Ground Zero. New York City Mayor Michael Bloomberg was unwavering. His address on religious freedom and tolerance on Governor's Island on Aug 3, attended by religious leaders from different groups, resonated Martin Luther King Jr's 1963 speech I Have a Dream.

What is troubling this time is that New Yorkers, regarded as the most progressive in the country and who live in a city with the most ethnic and religious diversity where more than 300 languages are spoken, suddenly seem narrow-minded.

We all know that the Sept 11, 2001, attack was done by fanatical terrorists. So if opponents agree that Muslims are not extremists or terrorists or Al-Qaida, then why are American making a fuss and why are they continuing to scapegoat Muslims?

Since a high percentage of Americans, according to a Time magazine survey, still hold a negative view of Muslims, great efforts are needed to help bridge the division between Americans and the Muslim world as argued by supporters of the cultural center. This should especially be true in New York City to reflect its great spirit of tolerance and openness. A Muslim cultural center will help serve this purpose. 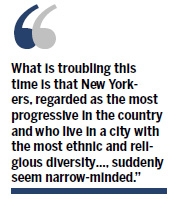 If you agree that Islam as a religion is not responsible for the terrorist attack, then "sensitivity to victims' families and friends" of having a Muslim cultural center near Ground Zero should not be an issue. The planned cultural center, according to reports, will include a gym, a swimming pool, a theater and an auditorium with 500 seats and will be open to all visitors.

In fact, the often labeled "Ground Zero mosque" or "mosque at Ground Zero" is such a misnomer that news organizations such as the Associated Press have issued guidelines to avoid the usages. It is a mosque to be built two blocks away from the World Trade Center site. And if you stand on any part of Ground Zero today, you won't be able to see the proposed center, which used to house a Burlington Coat Factory store that sold clothing and shoes.

If you think an Islamic center two blocks away is not okay, then you might not think it is okay anywhere in New York because you will unavoidably pass by many of them. And that is of course not what Americans are known for.

On my several trips to the US, I found a number of Americans easily distracted by these non-issues for too long.

For many months in 1998, many in the US chose to be obsessed with everything about Monica Lewinski and ignored key issues of national interest. And in 2003, when most parts of the world opposed the invasion of Iraq, many Americans chose to believe that Saddam Hussein possessed weapons of mass destruction.

I am a foreigner in the US, and what's happening in today's American national debate about the Islamic center sounds truly foreign to me.