BEIJING - The recent results of a Shanghai university's ranking of the world's top 500 education institutions have one unintended consequence: It may further worsen enrollment woes at Chinese universities.

Although more Chinese universities were among the top 500 this year than in 2003 when the annual list was launched, researchers admitted that there were still "no small gaps" in quality of education and professors between the best Chinese schools and schools in the top 100, which were mostly located in the US and the UK.

Chinese university presidents may also see little consolation in the fact that the exodus of many potential students is fast becoming reality.

For the second year in a row, there were dramatic decreases in the number of students who gave up the national college entrance exam. This year, there were about 1 million students who didn't take the exam, up from 840,000 last year, the Ministry of Education said. More than 20 percent of them likely chose to attend colleges in the US, the UK and other countries. 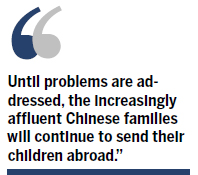 Zhang Ming, a political sciences professor at Renmin University of China in Beijing, believes two social trends have been working against Chinese universities. First, many families prefer to send their children to study abroad if they have the financial means to do so; second, school graduates from poor families, especially those in rural areas, would rather find a job than go to college.

The root cause of the trends, Zhang said, is the sheer frustration with Chinese higher education system. Findings from the Jiaotong University seem to have reinforced the public's negative perceptions.

At present, the trend of upper middle-class students going to foreign colleges, reportedly increasing by 20 percent year-on-year in major Chinese cities, is very alarming because it touches on issues about national education and the fleeing of talent from China.

For upper middle-class parents, the road of studying abroad for their children can start from a local private school with English as the main language of instruction. These schools can cost anywhere between $5,000 to $30,000 per year, according to the Council for American Private Education. The parents may simultaneously have to start saving for US college education.

To meet the demands of anxious parents, private schools usually provide two kinds of programs. Students with excellent academic results are encouraged to apply to top universities in the US, the UK or other Western countries, while those with less potential can opt for special courses that lead to degree studies in less competitive foreign universities.

The craze has spread to lower middle-class families as well. The financial management column in the Beijing News, which caters to college-educated readers, recently advised a middle-aged couple with a combined monthly income of 10,000 yuan ($1,470) to take out a loan and make use of credit cards for their children's education at a European college.

With so many students leaving, how will the future of local universities be affected?

Obviously, the loss of elite students will make Chinese colleges less competitive and it will hurt the quality of education. Building up more universities supported by higher tuition fees and social donations as well as State subsidies remains an elusive goal.

Private Chinese universities could soon face a more serious shortage of students, as most of them have been set up to accommodate students who have performed poorly in the national college entrance exam and are unable to attend a public university at a higher cost. But with more students turning to the West, even some public universities now have problems filling vacancies.

"I expect most private universities and third-tier public universities to eventually disappear," said a Beijing educator who runs a successful private school but prefers not to be identified.

There is a louder call for reform at national universities that can survive this shakeup.

Zhang has listed poor teaching, centralized management, an over-emphasis on research and low ethical standards as main problems that force prospective students to vote with their feet.

Until these problems are addressed, the increasingly affluent Chinese families will continue to send their children abroad. The Jiaotong University's list has just provided them a handy guide to do so.