The senseless scare tactics against Huawei

NEW YORK - Think of this: Eight National People's Congress lawmakers writing to the government asking to block a number of deals by a long list of American companies, from Lockheed Martin, Boeing to Honeywell and General Electric.

The reason would be simple yet compelling: national security. All these American companies have close ties with the US military. Allowing them to invest in China and supply equipment to certain Chinese industries would pose a serious threat to the country.

The EP3 spy plane built by Lockheed Martin was directly responsible for the collision with a Chinese fighter plane in the South China Sea in 2001, resulting in the death of Chinese pilot Wang Wei.

Meanwhile, Northrop Grumman, a top US military industrial firm which supplies radio communication systems to the Chengdu area air traffic control center, should also be barred because it manufactured the USS George Washington, the aircraft carrier that has been at the center of debate on the recent joint military drills by the US and South Korea.

The request by the lawmakers could go on and on to trace every US company back to the days of the Korean War to find out whether their products have been used by the US army or other armies against the Chinese.

By doing this, hundreds of US companies could be blacklisted for supplying planes to canned food to the US army during the bloody war, which took the lives of more than 100,000 Chinese soldiers.

If you think I am witchhunting, you are absolutely right.

However, eight members of the US Congress wrote a letter to the Obama administration using exactly that kind of language in a bid to block Chinese telecom firm Huawei from supplying equipment to the wireless broadband network of Sprint Nextel, the third-largest mobile operator in the US. 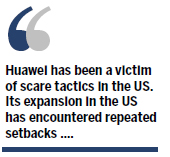 Well, could we find out how many US companies sold deadly weapons to Saddam Hussein and Osama bin Laden when both of them were regarded as America's friends?

The letter by the US senators Jon Kyl, Kit Bond, Richard Shelby, James Inhofe, Jim Bunning, Jeff Sessions, Richard Burr and Susan Collins, all of whom are Republicans, also warned the US government that Huawei's founder and CEO Ren Zhengfei was a former People's Liberation Army officer.

Well, should the Chinese also start to check how many US companies doing business in China are headed by folks with a US military background? In fact, I once knew an American business executive in Shanghai who had not only served in the CIA, but also in its predecessor, the Office of Strategic Services.

Yes, I am absurdly witchhunting like the eight US senators. And witchhunting using various scare tactics seems to be a favorite sport among Republican politicians in the US these days, especially this election year.

Mocking Fox News, which claimed that funding for the proposed mosque near Ground Zero in New York City might be linked to terrorists, talk show host Jon Stewart jokingly traced back Fox News' ties to Bin Laden and told the audience "as a nation, we should stop watching Fox News".

Huawei has been a victim of scare tactics in the US. Its expansion in the US has encountered repeated setbacks due to so-called security concerns despite its rapid growth in other parts of the world.

Just a month ago, Huawei lost a bid for 2Wire, a private US company that makes broadband software, because the sellers doubted Huawei's ability to win US government approval for the purchase.

The Committee on Foreign Investment in the United States, an inter-governmental agency that reviews foreign investment in sensitive US industries, was reportedly saying it is reviewing the letter by the eight US senators.

Hopefully the committee will not choose to believe in the fear tactics adopted by lobbyists, interest groups and in this case, a small group of Republican congressmen who yearn for more attention during the coming election.

US President Barack Obama knows all too well about the scare tactics, having suffered from those tactics from his opponents in pushing his healthcare reform and other programs forward. He should not let the committee to allow scare tactics work against Chinese companies who are coming to create US jobs.