Making the right impression on society

BEIJING - Laurel Herman believes China's new rich entrepreneurs need to improve their social manners if they are to impress their counterparts in other parts of the world.

The internationally-renowned image consultant believes habits such as eating with one's mouth open and smoking between courses will not go down well in Western society.

As a result, the etiquette guru is about to set up classes in London aimed specifically at the Chinese market.

The courses, which Herman says would be a 'prestige product', will be aimed at teaching the new rich how to behave not just in restaurants but at cocktail parties and even during a night at London's Covent Garden Opera House.

"Some Chinese don't eat in the way we are taught in the West. We see eating with your mouth open as rude. Eating a chunk of meat off your fork or smoking between courses would not be seen as good either," she said.

Herman, petite and suitably immaculately presented, was speaking in the lounge of the Ritz Carlton Hotel in

Beijing after a week of training executives how to improve their presentation skills.

She has been working for her company Positive Presence, based in London, whose clients include Deloitte, Citigroup, Barclays, Credit Suisse, the Bank of New York, Thomson Reuters, HP and IBM.

However, she will soon be launching a new separate company offering courses for Chinese entrepreneurs wanting to learn how to behave in certain social situations.

The programs, which will utilize highly-specialized trainers and involve 24 different modules, will guide attendees through a maze of different social situations in the country.

They would be aimed at avoiding social gaffes such as pouring lemonade into one's Chateau Lafite 1959 vintages, for which some Chinese entrepreneurs have developed a certain renown.

"Chinese entrepreneurs when they become wealthy often go out and buy yachts, cigars and wine but what they don't realize is that they are being seen as crass," she said.

"It is just the same in the UK when people from less well-off backgrounds become wealthy. They often don't know how to behave."

Herman said the aim of such courses, which she says would be "expensive" because of the high caliber of trainers involved, would be to give people the social confidence just to blend into the background.

"I think if people hadn't been through that social situation before they would be embarrassed sitting with another top executive at a box in Covent Garden, for example," she said.

"Feeling comfortable and knowing what to do at a cocktail party is difficult if it is something you have never experienced or seen before."

She said one of the problems a lot of the China new rich face is in engaging on the same social level as their children, many of who have been sent to top private schools in the West.

"They are sending their children to private school but then are worried when the children see them as having no taste or class," she said. 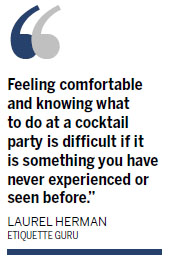 Herman, who is now in her 60s, started out selling her second hand clothes through the upmarket The Lady magazine as a young mother.

She progressed to running a dress agency and advising high profile women executives and politicians how to dress.

It was after the break up of her 28-year marriage in 1994 she decided to set up her own image consultancy.

"The break up was quite acrimonious and I felt I needed to dust myself down and just get on with life," she said.

"I thought there was a gap in the market for an image consultancy. It was a time when a lot of senior executives were having to do much more presentational stuff and they had concerns about their appearance and how they came across," she said.

Herman now regular makes appearances on television back in the UK as an expert on image.

One such recent appearance was discussing the poor presentational skills of former British Prime Minister Gordon Brown who lacked the glamour of his predecessor Tony Blair.

She said one of his problems was to try and be like Blair and construct an image which was not true to himself.

"Gordon Brown is a serious man. He is an economist and he is not charismatic like Blair or Clinton. He is, however, a good family man with many other qualities and it was important he remained authentic to those," she said.

Herman said senior executives can be seriously let down by body language and presentational skills. She cites the recent example of Tony Hayward, the outgoing chief executive of oil giant BP, during the Gulf of Mexico oil spill disaster.

"He looked like a rabbit caught in the headlights. He looked beleaguered and couldn't do anything about it. I have worked with BP in the past and had they called me in I could have done something to help the poor guy," she said.

Part of her work in China has been with Chinese executives working for multinational companies, training them among other things to be more assertive.

"You often get situations where the Chinese executive is on a conference call with senior executives in New York, for example. The New York guys don't stop talking and are very verbal and the Chinese guy lets everyone talk and doesn't say a word," she said.

"When they get off the phone they might say, 'Well, he is not doing very well. We must replace him.'

"What I try and teach executives here is that they mustn't be so deferential. They must make their voice heard. They must say something, even if they think someone else has already said it."

"If you look in the streets here, a lot of businesswomen look like students. They don't have to," she said.

She points to the women on reception and the waiting staff at the Ritz Carlton.

"If you look at the girls here, their hair and makeup is very well done. They are very well groomed and they look very professional. You don't have to do all the $2,000 Estee Lauder stuff. We do hair and make up in my office with freelance artists and it takes just five minutes," she said.

Herman said the clich that first impressions are vital in business is actually true.

"Whether it takes five seconds or two minutes to make that impression, it is still vital. It can be very difficult to change that perception," she said.

She said there are techniques to follow to help create a more favorable initial reaction.

"You need to have open body language, shake someone's hand firmly and, very importantly, look them in the eye," she added.

Herman insists creating a positive image is not about suddenly changing personality and being someone you are not.

"People say to me they are introverts or 'not the life and soul of the party' and I say to them: 'So what?'. It is all about confidently presenting who you are. Often it is about making simple adjustments," she said.

Meanwhile, Herman is looking forward to working with Chinese executives with her new classes in London.

"It will be like a finishing school and will be a fast track to giving them an understanding about good food, wine, clothes, culture and the arts: a little bit of everything," she added.

"The aim will be to make them more rounded people so they will be more confident in various key situations."