Roche to boost China headcount by 25% 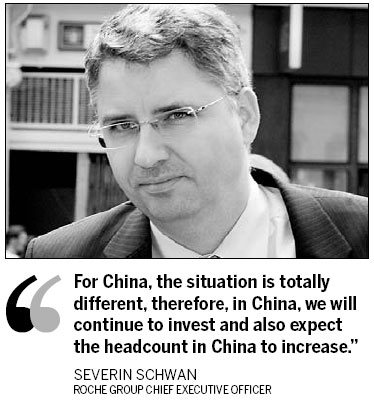 BEIJING - Swiss pharmaceuticals and diagnostic group Roche plans to increase its China workforce by 25 percent this year, though it is likely to trim jobs in the United States and Europe.

Roche is reviewing its business globally in order to cut costs and will axe jobs in the United States and Europe.

This is in response to setbacks in key drugs development and pricing pressures due to healthcare reforms in those marketplaces, said Schwan, without specifying the number of jobs to be lost.

"For China, the situation is totally different, therefore, in China, we will continue to invest and also expect the headcount in China to increase," he said.

China is investing thousands of billions of yuan to improve healthcare infrastructure, aiming for near-universal health coverage. Roche has invested more than $1.5 billion in China. It has realized double-digit growth in the last few years.

The turnover of its China business amounted to $1 billion last year, accounting for more than 40 percent of Roche's total turnover in the Asia-Pacific region.

China is one of only four countries in which Roche has a complete value chain, with the others being the US, Switzerland and Germany.

The world's No 1 diagnostics and fifth-largest pharmaceutical company expects the pharmaceutical market in China will exceed $100 billion by the end of 2015.

Many multinational drugmakers are expanding their workforce in China, while cutting jobs in developed markets, which are affected by the financial crisis and facing price pressures caused by healthcare reform.

US pharmaceutical company Lilly doubled its staff in China last year and is further expanding its payroll this year.

Yu Deming, president of China Pharmaceutical Enterprises Association, said that competition on talent will intensify in China among multinational and domestic pharmaceutical companies, focused on research and development and sales.

Roche's advantage is its combination of diagnostics and pharmaceuticals, which enables it to create personalized healthcare solutions to serve the market, said Schwan.

Personalized healthcare is a concept where the right treatment is prescribed to the right group of patients based on their common individual characteristics.

By receiving the right and effective treatment, patients could not only achieve better treatment result, but also avoid unnecessary side effects caused by ineffective therapies, saving time and costs.

"It also help control rising healthcare expenditures. It can benefit the Chinese people and help the government reduce costs," he said.