A film that's put a city on edge

BEIJING - When Zhang Yimou's latest movie goes on general release across China in the middle of this month, officials in a central Chinese city on the Yangtze River will be as anxious as Zhang about the audience's response.

Under the Hawthorn Tree, set in the mid-1970s during the "cultural revolution" (1966-76) with characteristic puritanical, repressive values, is about an agonizing but fruitless romance between a city girl, Jingqiu, and Laosan, the foster son of a village head.

The movie is adapted from a best-selling novel dubbed as "the most innocent love story" in China. Ironically, officials of Yichang, where it was shot, are not shy about their economic motive in attracting an influx of visitors, a tourism marketing model popular among smaller Chinese cities.

Although there are no official figures on the monetary worth of movie tourism, the screen locations of Judou and Curse of the Golden Flower, two high-profile movies made by the internationally acclaimed Zhang, have reportedly both drawn hordes of movie lovers every year.

To capitalize on the success of Avatar earlier this year, two Chinese cities were in a dispute whether scenes of the Hallelujah Mountains in Avatar were modeled after their scenic mountains. One of the cities, Zhangjiajie, went so far as to rename one of its peaks after the floating mountains in the Hollywood blockbuster.

"In tourism marketing, 70 percent of your success depends on publicity, and 30 percent on scenic resources and virtues," said Zhao Xiaoming, mayor of Zhangjiajie. "So, hype is not a bad promotional ploy, as long as it gets more people to Zhangjiajie and gets them to know the city better."

Hawthorne Tree's hosts were also eager to hype up its locations. 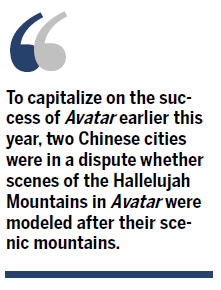 For the past couple of months, the Chinese Internet and newspapers had been rife with rumors that the main scene location, Yuan'an county under the jurisdiction of Yichang, had planned to rename itself as Hawthorn county.

Yuan'an officials have now denied they had ever had such a plan after strong opposition from netizens, but acknowledged the media reporting surrounding the issue had brought sudden fame to the county tucked away in green, rolling mountains.

I have no doubt about the success of Hawthorn Tree, Zhang's first romantic story in a decade. The last one was The Road Home that catapulted the actress Zhang Ziyi into international filmdom. There is also talk that the director has been aiming for an Oscar for the movie.

But I do worry how movie tourists will be entertained after they flock in and what promotional benefits the hosts can gain from the event, in additional to more tourist dollars.

Research shows that in the West, easy access to the locations and organized location tours are key to any sustainable movie tourist projects. But at the moment, few tour agents in major Chinese cities now offer such packages to remote rural movie locations.

Despite rapid development in the past couple of decades, Yichang as a transport hub is still an inland town plagued by rude driving, vehicle exhaust, widening gap between rich and poor and generally less than desirable service standards.

And try to imagine the experience of backpackers who need to take a 100 km ride on bus to Yuan'an, the main screen location and one of the poorest areas in that part of China.

There is nothing wrong about the local plan to leverage off people's obsession with Zhang's movies. But the officials also need to have a holistic approach to develop the area's "soft power", such as the local cultural appeal and its ambition to become one of the most livable cities in the country.

The local government had worked hard to persuade Zhang to choose the city as the movie's main sites. Government offices at different levels had set up special support teams with responsibilities including helping find locations, set pieces and extras. Even the renovation of a local cancer hospital was delayed because Zhang wanted to shoot a ward scene there.

But getting the movie should just be the beginning.