BEIJING - China's non-manufacturing industries expanded at a faster pace in September behind increases in construction and consumer spending.

A purchasing managers' index (PMI) released on Sunday by the China Federation of Logistics and Purchasing rose to 61.7 from 60.1 in August. The data follow a jump to a four-month high for the manufacturing PMI announced on Friday, underscoring sustained growth momentum in the world's fastest-growing major economy even as the government seeks to cool the property market.

"Non-manufacturing activities have been growing rapidly and in a sound range recently, and September's gain is partly due to seasonal factors," the federation said in a statement on its website on Sunday. 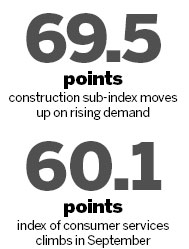 The growth also reflects "the government's increased investment in the service industries as it seeks to adjust the economic growth model," it said. Index numbers above 50 indicate an expansion and below 50 a contraction.

A construction sub-index rose by 3.6 points to 69.5 last month on rising demand, and an index of consumer services climbed to 60.1, according to the statement, which gave no comparative figures.

Real-estate sub-indexes on activities, new orders and fee prices all jumped from August, indicating a rebound by the industry, the federation said.

The government on Sept 29 intensified efforts to cool property prices by tightening down-payment requirements for first homes, suspending third-home loans nationwide and pledging to quicken a trial of a property tax.

The steps may pressure future growth of the property sector, the federation said on Sunday. The agency also noted rising inflationary pressure indicated by higher costs of cement, steel and food.

The non-manufacturing PMI was based on data compiled from purchasing executives at 1,191 companies in 20 sectors including building, manufacturing services and consumer services. The figures aren't seasonally adjusted.