Out of Africa, 'the land of golden opportunity' 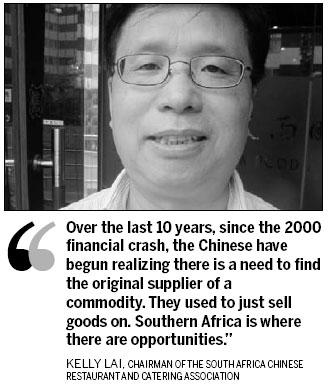 BEIJING - Kelly Lai cannot help raise a wry grin when he looks at the latest gold prices, now well in excess of $1,200 an ounce compared with a little over $444 at one point in 2006. The biggest bet currently on the cards is a call option for $2,000 expiring in 2011.

The 63-year-old, who lives in Beijing, is one of thousands of Chinese who have belatedly realized that owning the source of a product is a wise business move. He and his partners acquired a gold mining concession in Zimbabwe and copper concessions in Zambia and Tanzania six years ago and he is currently looking for experts with modern skills in China to fully exploit it.

Lai, who was born in Guangzhou, has made Africa the base for his entrepreneurship for the past 43 years after moving from his school in Hong Kong to study international trade at Witwatersrand University in Johannesburg, South Africa, then one of the highest-ranked in the world. He already had relatives there and found the climate more amenable.

He initially opened an import and export company (exporting minerals) in the 1970s in Johannesburg. In the 1980s he took over a factory to assemble audio and visual components mostly with materials from Hong Kong, Taiwan, Japan and later from the Chinese mainland, turning them into branded Yotaka devices for selling on to chain stores in Sun City, Bloemfontein and Swaziland, where he also manufactured garments for export. However, he sold the businesses in the late1990s after discovering he was being undercut by rival companies he said were able to dodge paying customs duty. In the meantime, Lai had branched out into the restaurant business, at one time owning six outlets in South Africa. Now he has two and has just bought Beijing Yong Tai Happy Chef Restaurant at the Lido Holiday Inn in Beijing.

However, it is in Zimbabwe where he sees the best opportunities to make money. Long characterized by gross economic mismanagement, hyperinflation and reports of human rights abuses, the country appears to be slowly pulling out of the economic Doldrums after Prime Minister Morgan Tsvangirai and his opposition party, Movement for Democratic Change, agreed in late 2008 to share power with President Robert Mugabe and his Zimbabwe African National Union-Patriotic Front party.

Lai says Zimbabwe is now opening up its plentiful natural resources to outsiders, mimicking South Africa's attempts to boost its economy - and Lai is in at the beginning.

He also looks set to benefit from China's decision to open up its gold trade. The nation is the biggest producer and the second biggest consumer of gold and gold products, although its trade has typically been largely domestic. Gold demand in the nation surged 9 percent to 427.5 tons in 2009. Zhang Bingnan, vice-president of the China Gold Association, expects China to report higher gold output for 2010 with many seeing it as a safe haven with good liquidity for investment purposes.

"Indeed, since the SGE began physical gold trading for individuals in 2006, trading volume has increased fourfold," it added. "As a result, we believe China will play an increasingly important role in the global gold market."

In August, the People's Bank of China said the country may "increase foreign members on the Shanghai Gold Exchange and will also study ways to allow foreign qualified bullion suppliers to deliver to the exchange".

The latest steps were "extremely encouraging and seem certain to lead to increased gold demand in a country that has recently been contending with India for position of the largest consumer of gold in the world", said George Milling-Stanley, the New York-based managing director of government affairs at the producer-funded World Gold Council.

To increase physical gold supply, the central bank will "increase the number of commercial banks who are qualified to import and export gold, based on the market demand situation", it said in an early August statement. The central bank also said it would support overseas investment plans by "large-scale" bullion companies by backing them financially.

The news on gold is extremely good for him. A recent Bloomberg survey revealed the yellow metal was expected to rise to $1,500 an ounce next year. Deutsche Bank went further, in June predicting a price of $1,700 an ounce as currencies slump.

"I am seeking to get more skilled workers into Zimbabwe and finding the best economic way forward," he said. "Zimbabwe is cheaper than other African countries, where the mines can be as deep as 6,000 feet and labor is more expensive. I am also taking investors there. I don't personally have mining skills. I concentrate on finding those who do, and on the management, finances and capital. Over the last 10 years, since the 2000 financial crash, the Chinese have begun realizing there is a need to find the original supplier of a commodity. They used to just sell goods on. Southern Africa is where there are opportunities. There are lots of Chinese there. Every flight from China is made up of 60 to 70 percent, sometimes 80 percent Chinese and that includes one airline that flies twice a day from Beijing."