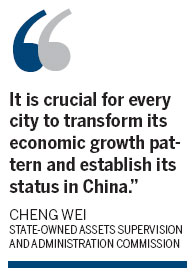 Guangzhou was second to Shanghai last year, and this year is the first time it has topped the list in its six-year history.

Forbes China Executive Chief Editor Raymond Liu said Guangzhou's top spot can largely be attributed to its dynamic economy and creativity. Although the city encountered great difficulties during the global economic recession, its GDP growth reached 11.5 percent in 2009 and 13.6 percent during the first six months of this year with a boost from the 16th Asian Games.

This year's results have shown the Yangtze River Delta region continues to lead in business competitiveness, as it hosts six of the top 10 cities.

The list also indicates cities in Shandong province, such as Qingdao, Yantai and Weihai, are also gaining steam. Compared to the 2009 list, nine cities rose, two maintained their positions and two fell.

The list also showed business development is lagging in many northern and western cities.

Beijing and Tianjin, and Hebei province are falling behind because of the resources wasted during their irrational competition in previous years.

Cities in western China experienced the greatest setbacks in last year's economic performance. Of the nine western cities on the list, only Shaanxi's provincial capital, Xi'an, and Baotou, in the Inner Mongolia autonomous region, rose.

Guangzhou was able to usurp Shanghai's top spot this year because of the latter's relatively higher management costs.

"Cities will be categorized into different levels. It is crucial for every city to transform its economic growth pattern and establish its status in China," said Cheng Wei, director of the strategic research department of the State-owned Assets Supervision and Administration Commission.