Dandong, a third tier, coastal city in Northeast China is expected to fuel economic growth in the region following a series of transportation construction projects .

Eight railways, two harbors and one international airport are now being built. Workers will break ground on the Yalu River bridge this year.

"As a key point along the Liaoning coastal economic belt, Dandong receives a lot of financial support from the central government for infrastructure construction," said Dai Yulin, Party chief of the Dandong municipal committee.

Dandong is located in Liaoning province, situated across the Yalu River from the Democratic People's Republic of Korea (DPRK). It is the biggest border city in China.

The metropolis provides the nearest waterway access for Jilin and Heilongjiang provinces, facilitating overseas trade to the hinterland.

"The advanced transportation system determines Dandong's status as a logistics hub of Northeast China, the Korean Peninsula and Northeast Asia," said Liang Qidong with the Liaoning Academy of Social Sciences.

"It also helps the city's opening-up undergo a qualitative leap," he added. 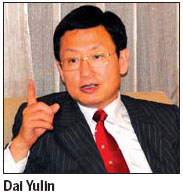 "So far, our investment here is so good. Also, we are optimistic about the city's trade prospects with DPRK," said Seung Han Paik, president of SK networks (China).

China signed a trade agreement with DPRK at the end of last year.

But, in order to take advantage of the compact, Dai stressed, changes must be made in Dandong. He noted the city must become more industrialized, urbanized and modernized through urban space adjustment.

According to experts, Dandong's logistics industry will develop quickly given the easing of recent tensions in the Korean Peninsula. The city is just 220 km away from DPRK capital Pyongyang and 420 km away from Seoul, capital of ROK.

Last year, foreign investors signed $1 billion in contracts with 77 companies, an increase of 63.4 percent over 2008.

The bureau also helps organize an annual Pyongyang international fair, the only exhibition of its kind in DPRK.

"Seventy percent of the exhibitors are organized by us," said Pan Shuang, head of the bureau.

The bureau will put more attention on attracting US and European companies in the future, she said.

Gary Berthsch, chairman of Trade Secure, walked away from the fair with slew of Dandong investment promotional literature. He explained he planned to pass the material on to friends in the US.

"I see great potential here, especially with the expansion of Dandong Port. I will bring the information back to the Georgia harbor bureau," Berthsch said.

"I think I will take part in Dandong's future development. There are so many opportunities," he added excitedly.

Dai agreed. "Dandong is a city with abundant resources and unbounded potential. We are ready to welcome investors from home and abroad."