College a lens on Chinese universities 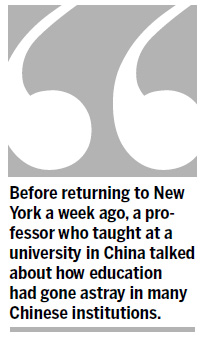 A liberal arts college in the United States offers more benefits than universities in China.

At the college where my daughter studies, the students all have the same meal plan. From early morning to late evening, they have unlimited access to buffets comprising starters, main courses, fruits, beverages and ice creams.

Those students needing financial assistance now receive financial aid instead of student loans, a policy that has not wavered during the economic crisis.

In fact, the school, whose endowment devalued by some 20 percent during the financial meltdown in the US two years ago, has kept its promise of offering "need-blind" admission to international students. So bright but economically poor students from South Africa, Ghana, Venezuela, Brazil and China are able to enjoy an opportunity they had never dreamed of.

I made my first trip to the school during its parents' weekend last week. It is the most beautiful season of the year in this part of the US as the leaves are changing colors. Soccer and rugby games were in progress as I arrived.

Several academic departments were having a reception. I went to the math and Spanish ones, chatting with professors about everything from the curriculum to campus life. It was not at all like the parent-teacher meetings I was used to in Shanghai during my daughter's high school years. In Shanghai most teachers talked only about test scores.

While college ranking may not be everything, what I saw over the weekend was an education institution where everyone was passionate about what they are doing and striving to make the school even better.

The president talked about the unchanging fundamental values of the college. The school has not laid off any faculty and staff during the financial crisis, thanks to generous alumni and students to some extent. In fact, the students were a powerful voice opposing the firing of any professors and the cutting back of financial aid.

Though a small college of only 1,600 students, it has an art museum and a natural history museum, something you don't find in a number of big Chinese universities.

One of our friends, an American journalist who has known my daughter since she was four years old, drove from upstate New York to attend the parents' weekend. He was drawn to a game being played in the art museum asking: "Who killed Jack O. Lantern?" It was the Halloween weekend and the answers were hidden in the art on display. We went to the student jazz concert and also watched some of a rugby game.

My daughter showed me the old school library where she says she spends most of her time, including sleeping on the couch on a few hot summer nights. It's like her home. In this old building you can easily find books from the 1880s or even 1830s. It is not like so many Chinese universities where the library buildings impress people more than their collections.

I already felt that mood 10 years ago when my alma mater in Shanghai built monstrous twin towers in the middle of the beautiful old campus. No one seemed to think to use that money to hire good professors or offer financial aid to some of the brightest students from underprivileged families.

The parents' weekend I attended was a clear reminder of how the fundamental values of education have long been forgotten by many Chinese schools.

The author is China Daily's chief correspondent in New York.

You can reach him at chenweihua@chinadaily.com.cn.