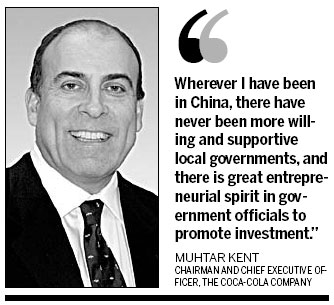 Hohhot - While many foreign businesses are complaining about China's investment environment and considering transferring their factories elsewhere, others, notably The Coca-Cola Company, are not only staying put but expanding.

The beverage maker announced in October the opening and near completion of three new bottling plants with a total investment of 1.6 billion yuan ($239 million). They are located in the Inner Mongolia autonomous region and the provinces of Henan and Guangdong.

The three new factories are part of the company's $2 billion three-year investment plan launched in 2009.

"Wherever I have been in China, there have never been more willing and supportive local governments, and there is great entrepreneurial spirit in government officials to promote (inbound) investment. That is what we always see, (and) I think that continues," said Muhtar Kent, chairman and chief executive officer of The Coca-Cola Company.

"That is also why Coca-Cola continues to invest and build factories very quickly, more quickly than in other parts of the world," he added.

"The investment plan has been going well and we will be ahead of schedule by the end of this year. This is all attributed to the friendly economic and investment environment in China."

Chinese government officials have repeatedly emphasized that China welcomes foreign investment and will create a more business-friendly environment. In April, the State Council launched new investment guidelines offering preferential policies on tax and land use and encouraging more investment in the service sector.

"There are (investment) barriers in all countries, but a more important thing is whether they try to minimize the barriers and to move forward. China is on the right track and has quite an equilibrium environment ... (We) enjoy huge competitive edges, investment incentives, not too much bureaucracy, and fast speed," said Kent.

China's economy rose by 9.6 percent in the third quarter. The nation overtook Japan as the second largest economy during the first half and is set to do so in the second. In the framework of its 12th Five-Year (2011-2015) Plan, the Chinese government vowed to rapidly increase people's income and transform the economic development model to one that is more domestically consumption-oriented rather than export-driven.

"The new Five-Year Plan will benefit consumer product companies such as Coca-Cola, and we are confident about Chinese business," said Kent.

By 2010, Coca-Cola will have 42 plants nationwide and after 2011, when the three-year plan will have been implemented, the company will continue to invest and expand, said Kent, without giving details.

"We are sure China will become our largest market. It's a matter of time."

Two of the new plants the company opened recently are located in China's central and western regions. The company spent 600 million yuan opening a bottling plant in Wuhan in October last year. Wuhan is the capital of Hubei province, also in the central region.

The company has earmarked more investment projects and is opening new factories in the central and western regions as the government calls for more investment in those less developed areas, Kent said.

The world's second largest laptop maker Acer Inc said early this month that it will set up a second China operating headquarters in Chongqing municipality. The company is also planning a global manufacturing center in the western municipality. Pfizer, the world's leading pharmaceutical, also announced in October it would set up a research and development center in Wuhan.

Coca-Cola had offered to purchase Huiyuan, the nation's largest juice maker but the proposal was turned down last year by the Chinese government over market monopoly concerns. "We are not seeking mergers and acquisitions at the moment - not just in China, but also in other parts of the world. We are focused on organic growth, growing our own brand without buying new brands," Kent said.

In June, Kent was elected as chairman of the US China Business Council. He led a delegation this month to discuss with Chinese government officials how to better promote the commercial and economic ties between the two countries. The two nations need "more communication, more investment from each side", he said.