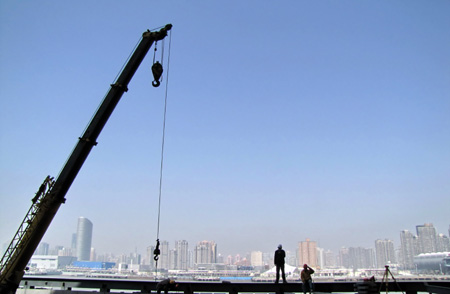 A property project is seen from the World Expo campus in Shanghai. Jing Wei / for China Daily

Event site to be earmarked as prime development land in metropolis

SHANGHAI - The recently concluded World Expo has provided a rich heritage for Shanghai, in the form of upgraded infrastructure, outdoor decoration and massive greening.

In addition, analysts said the spacious site will become a construction highlight, and is expected to drive the city's future development.

Covering an area of 5.28 million square meters (sq m), at least one third will be converted into business-related facilities, or commercial properties such as office blocks, shopping malls and high-end residential apartments, said Chen Sheng, director of the China Index Academy in Shanghai.

Although details are still under discussion, Yang Hongxu, an analyst with Shanghai-based E-house China Research and Development Institute, believed the land is highly likely to develop into one of the city's core financial zones.

"The existing Expo site will hold 7 million sq m of buildings, and with the upgrading of transportation and the infrastructure, this area will become Shanghai's future development engine," said Yang.

There will also be many significant buildings erected in the area, said Yang. "Considering the lack of available development land in the downtown area, the Expo site offers a good choice. Situated along the two sides of the iconic Huangpu River, this area is the apple of many property developers' eyes," said Yang.

Even a month before the Expo closed, experts from financial institutions and property firms had begun discussions about how to develop the area.

"It surely will be a big issue for Shanghai's future development," said Regina Yang, an analyst with Knight Frank, a leading property consultancy.

Public information shows Shanghai spent more than 270 billion yuan ($40.66 billion) on improving the city's infrastructure for the event. Such lavish spending has also generated added-value for the site.

Bidding for the plot is likely to equal all previous offers for land prices, and could even set a new national record, said analysts.

During a land auction in early September, a plot located neighboring the Expo site in Pudong along the Huangpu River was purchased by Zhuo Light Holdings Ltd for 4.8 billion yuan, equivalent to an average gross floor space price of 35,490 yuan per sq m.

The plot also includes the highest residential block in Pudong. 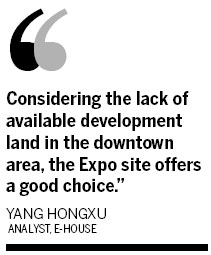 Unlike many overseas expo sites which were situated on the outskirts of cities, Shanghai's is located in the downtown area, and is well equipped with established transport facilities. "These are all very attractive factors which boost the property price to an amazingly high level," Chen said.

The Shanghai Expo theme of "Better city, better life" is also likely to inspire the government think tank to promote a low carbon, environment-friendly plan on the Expo site.

Apart from all the visible benefits, the reputation of the Expo will continue to be a free advertisement for the plot, no matter whether it's developed into luxury apartments, grade A office buildings, or shopping centers, said one analyst.

"It's true that the Expo site has everything that all eligible property developers want - infrastructure, transportation facilities, completed relocation, and green areas, but my concern is that some of the land plots had been practically pre-sold to some domestic developers by the government," said an expert speaking on condition of anonymity.

It's not the first time this has happened, he said, claiming that some important previous land biddings often excluded overseas bidders by the use of complicated design requirements. This will not aid the development of the site, he added.

Almost all types of commercial property across Shanghai saw rapid growth in leasing and sales throughout the past quarter and the outlook continues to look good, figures from housing consultancy showed.

The average grade A office transacted rental in Shanghai was 7.02 yuan per sq m per day at the end of the third quarter, according to property consultancy DTZ.

From January to July, real estate investment in the city increased 34.9 percent year-on-year to reach 104.8 billion yuan. At the same time, the investment growth rate in the office sector increased by 19.8 percent.

Meanwhile both residential and retail sectors increased by more than 42 percent, the latest DTZ report said.