BEIJING - Nearly 70 percent of consumers in China feel that the use of pirated software is not as safe as genuine software, according to a Microsoft report on consumer attitudes towards pirated programs.

From Sept 22 to Oct 5, Microsoft conducted a survey on software piracy in 20 countries with more than 38,000 consumers.

According to data released by the report, 80 percent of consumers are worried about the risks of counterfeit software, and 70 percent believed that genuine software is more secure, more stable and easier to update. About 73 percent of respondents surveyed said that if given a choice, they will buy legitimate software, but two-thirds said it is difficult to identify pirated products. 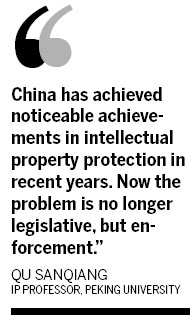 However, according to joint research by China's State Intellectual Property Office and information technology consulting website Chinalabs.com last year, the rate of software piracy in China was 45 percent in 2009, 2 percent lower than 2008.

In China, Microsoft cooperated with Chinese analysis company Inspur Information to conduct research about pirated Windows software this year. According to the result of the survey, 93 percent of pirated Windows7 software has potential risks in system security and stability, which may lead to theft of sensitive personal information.

According to Yu from Microsoft, the company, with the support of the government in the past few months, has investigated more than 16 major cities in China.

As a result, more than 490 computers with pirated software and 6,331 units of counterfeit software had been seized.

In October, China launched a six-month campaign to fight intellectual property infringement, in order to improve the country's IP protection.

"We are very optimistic about the market with the support from Chinese government," Yu said.