BEIJING - China Unicom, the official telecom carrier that offers iPhones in the Chinese market, announced on Monday that it will place even tighter restrictions on iPhone purchases to deter scalpers and stop iPhone users from leaving for its competitor China Mobile.

The new restrictions will take effect on Wednesday for new customers and will not affect existing customers.

According to the announcement, subscribers who buy iPhones from China Unicom must use it with the bundled China Unicom subscriber identity module (SIM) card. If the SIM card and handset do not match, the operator will block the mobile phone, freeze the deposit, and terminate any promotion associated with the contract.

Under the previous agreement, after an initial deposit, customers can get a free iPhone 4 with a bundled SIM card by buying the package from China Unicom.

The deposit should be returned once the contract expires. The deposit for a 16-gigabyte iPhone 4 with a two-year contract is priced at 5,880 yuan ($878), while the 32-gigabyte model retails at 6,999 yuan.

"The new rule aims at regulating the iPhone market," said Jake Li, an analyst at Guotai Junan Securities. "A lot of scalpers bought iPhone handsets and sold the card and the phone separately." 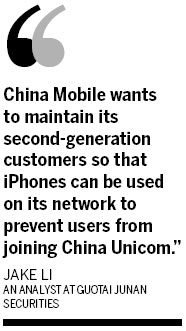 He pointed out that China Unicom subsidizes the cost of each iPhone, so China Unicom hopes to attract more subscribers who really need the handset and third-generation (3G) service, not scalpers.

"Otherwise it is a waste for China Unicom to subsidize the phone," said Li.

China Mobile, the biggest telecom carrier in the country, has offered free SIM card-cutting service at its stores and online customer service for the iPhone users since China Unicom launched the most popular handset in China. IPhones use a smaller SIM card, so if users want to use the phone in a telecom network other than China Unicom's, they have to cut the size of their cards.

"China Mobile wants to maintain its second-generation (2G) customers so that iPhones can be used on its network to prevent users from joining China Unicom," said Li. Once China Unicom begins enforcing the new rules, new China Unicom customers will not be able to use 2G SIM cards in iPhones, he said.

Since Nov 22, mobile subscribers in Tianjin and Hainan have been allowed to switch operators among China's three telecom carriers.

According to the Chinese IT website Cctime.com, within one week, 65 percent of those who switched carriers transferred to China Unicom in Tianjin. According to China Unicom, the number of its 3G subscribers reached a record of 11.02 million users, of whom 20 percent were new iPhone 4 users. The company has received 600,000 pre-orders for the iPhone 4 since Sept 17.