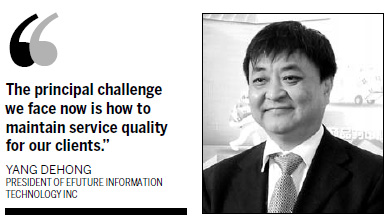 China's distribution and e-commerce businesses are poised to meet the challenges and take advantage of the opportunities expected under the 12th Five-Year Plan (2011-2015), according to a prominent IT expert.

This and other remarks on the next Five-Year Plan come from Yang Dehong, deputy chief of the China Chain Store and Franchise Association's IT applications committee, who spoke with China Daily recently.

The plan, which is to be officially announced early next year, is a blueprint of China's economic and social development in this decade.

"We people working in the distribution and e-commerce sectors are following the 12th Five-Year Plan developments closely," said Yang, who is also president of Nasdaq-traded eFuture Information Technology Inc, a leading software and service provider in China.

"The plan's proposal lays out strategies for expanding domestic consumer demand in rural areas and elsewhere, and therefore creates huge opportunities for the distribution business," he explained.

"The business has thrived in fairly developed cities and now can embrace markets in previously underdeveloped regions, which have seen a remarkable surge in demand for logistics services."

China has more than 20 million retail outlets, including some very well-known companies, such as the electrical appliance giant Gome and supermarket chain Wumart, which are doing very well, Yang said.

"A majority of these big names are eFuture's clients and have been looking for ways to extend their reach to small and medium-sized cities and towns.

"The principal challenge we face now is how to maintain service quality for our clients. So, we plan to set up offices in places where clients have an established presence and to strengthen the training of our partners."

Yang said that while China's distribution business has seen some significant progress in recent years, it is still too early to call it a real success.

"The high cost of circulation really hinders the development of China's retail business," Yang pointed out. "Also, the logistics network is still young and doesn't know how to meet high-quality, efficient distribution needs."

This view was shared by a number of people at the second annual meeting of China Distribution 30 Forum, in Beijing, on Dec 4. It drew more than 100 participants, including 30 industrial elites, as well as major scholars and senior government officials.

They were there to share their thoughts and experiences on the distribution business' present situation and future developments.

One of them, Chen Wenling, chief economist at the China Center for International Economic Exchanges, one of the country's top think tanks, said that the business is expected to play a very important role in macroeconomic growth in the next five years.

"The distribution business trend is characterized by expansion to rural areas and the integration of regional distribution operations. It is also making a close connection between intangible and tangible markets," Chen said in a keynote speech at the meeting.

Another participant, eFuture's Board Chairman Yan Yanchun, predicted that China's retail market will reign in the global retail battlefield as early as 2020. Its size is estimated at as much as 10 trillion yuan (about $1.5 trillion) by 2030.

"However, China's retail giants are still 'sleeping lions', now, in online retailing, which is already a major source of revenues for their US counterparts.

"So, distribution and e-commerce companies need to improve their technology so they can support the development of the retail sector. Their future will partly be shaped by the application of the Internet of Things and cloud computing technologies," he added.

The economist Chen commented on this by saying, "The distribution and e-commerce business boom has produced more than 25,000 online shops in the eastern manufacturing hub of Yiwu and its suburbs (in Zhejiang province)," and pointing out that the city government there is cooperating with the China Academy of Sciences to introduce the Internet of Things to the local market.

Chairman Yan further suggested that the central government promote an integrated farm produce market by abolishing the unreasonable taxes and charges that have been levied on farmers and sellers.

Prioritizing the development of distribution as part of the national economic strategy would be helpful in cutting distribution costs, he added.

In fact, the central government has made a great effort to help China's distribution business evolve, said President Yang.

What he means is that the Ministry of Commerce, in November 2009, urged local commerce authorities to accelerate the development of the e-commerce part of distribution.

The ministry also said it will help China's e-commerce companies push their business and encouraged the development of e-commerce applications within large distribution companies.

"In addition to the favorable government policies, distribution companies themselves need to keep up with the times by being more competitive," Yang said.

He noted that eFuture has an innovation center and a distribution research institute to help the company achieve its technological ambition.

"If we go back to the time when I was working at IBM, a lot of people, including me, wouldn't have thought much of local distribution companies, since they were too small and too short of funds and technology," Yang said with a self-deprecating grin.

"Now, here I am working for a Chinese distribution company that is traded on Nasdaq and has the potential to be as valuable as IBM. I think that's progress for both the country's distribution business - and me."