How to control medical fraud epidemic 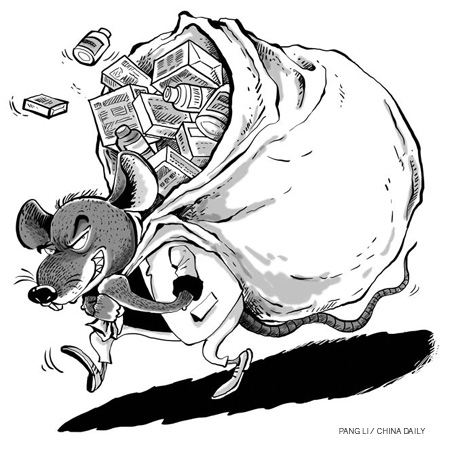 The Chinese government's recent announcement that it plans to increase public health spending during the 12th Five-Year Plan (2011-2015) and ensure that co-payments are limited to 30 percent is good news for many citizens who dread the consequences of serious ill-health. So too is the decision to broaden the healthcare market to non-public hospitals provided the right financial and quality regulation regime is in place.

But the impact of the two initiatives will be seriously diminished unless the government confronts one of the largest and mostly hidden costs the worldwide health systems face - the cost of fraud.

Healthcare fraud worldwide is enormous. In the United States 80 percent of the recoveries for the federal government under so-called Qui-tam legislation (public participation in private lawsuits) relates to healthcare. In the 23 years between 1986 and 2009, this amounted to more than $21 billion. But this may be just the tip of an iceberg, because detected fraud comprises a very small amount of the actual level.

In 2009, the University of Portsmouth in the UK published a report that which analyzed the results of 66 measurement exercises from six developed countries and identified an average loss rate of 5.6 percent. Applied to the total worldwide public healthcare expenditure, the losses from fraud every year would be enough to build as many as 1,500 new hospitals at developed country prices.

The methodology is there and has been used successfully in a number of countries. But three problems need to be addressed in using it.

The first is that local governments may see the issue as largely one of shifting resources from one pocket of the government (medical insurance) to another (public hospitals). That would be a mistaken view partly because the frauds of course will raise the out-of-pocket payments that citizens have to make and partly because fraud reduces the amount of healthcare that could otherwise take place.

The second reason is the embarrassment factor. Generally, public agencies across the world are not keen to concede that 5 or even 10 percent of the money they spend is fraudulent.

Third, fraud measurement, prevention and investigation all costs a lot of staff and money and many local governments don't have the resources to invest up-front in tackling the problem.

But looking at these issues as opportunities throws a different light on the situation. Undertaking fraud loss measurement exercises gives local leaders the chance to show they are addressing the issue and finding solutions. In the United Kingdom, the National Health Service Counter Fraud Service reduced the amount of fraud losses by up to 40 percent in just two years.

Knowing the extent of fraud also provides justification for providing more resources to fight it. Best of all, reduced losses and recoveries of stolen funds can be channeled back directly into the fight against fraud. In the UK, we calculated that we had saved or recovered 12 for every 1 we spent. In the United States, officials claim an even higher benefit cost ratio of 15:1.

In terms of how to tackle fraud, a combination of strategies is required to be adjusted to the particular context of a country's health system. The World Health Organization annual report of 2010 identifies 10 ways of making health resources go further and many of them include addressing aspects of fraud and corruption such as tackling inappropriate and over-prescription of medicines and services, promoting greater use of generic drugs and tackling counterfeit and substandard drugs.

The general thrust of public hospital reform program, from reducing the reliance on income from sale of pharmaceuticals and increasing budget support and introducing performance related pay for doctors to developing clinical pathways to curb unnecessary services and charges shows great promise. But these changes are likely to have a long-term impact only if they are made systematically and resources are made available to monitor and fight fraud on a long-term institutional basis.

Most importantly, the vast and honest majority of medical system staff members and the wider public need to be educated and mobilized to tackle the issue. Staff members at all levels should understand what fraud is and how they can report and be taken seriously without fear of retribution. The public, whose pockets are being picked, need to be told that being involved in frauds like lending their insurance cards may have costly implications for them and their families when they most need help. We have to recognize that the fight against fraud is a fight for our future.

Grayson Clarke is resident fund management expert with the EU-China Social Security Reform Project, and Jim Gee is the chair of the Centre for Counter Fraud Services at the University of Portsmouth and director of counter fraud services for PKF UK Ltd.