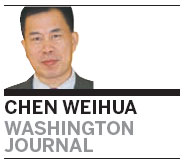 For many East Asians, Singapore has long been a model of success, an economic miracle. It was one of the four "Asian tigers" that inspired Chinese leaders to pursue economic reform and opening-up. The city-state now boasts the world's third-highest level of GDP per capita, far ahead of its former colonial overlord Britain and trailing only Qatar and Luxembourg.

But Singapore has also been a target of Western criticism. The Paris-based group Reporters Without Borders ranks Singapore 149th of 179 states in its latest Press Freedom Index, just below Russia but above Iraq and Myanmar. A Gallup poll in November ranked Singapore, with a population of 5.3 million, as the "least emotional" on a daily basis of any country.

Many Singaporean policies that raise eyebrows in the West, such as the well-known ban on chewing gum, can be directly linked to the city-state's founder, Lee Kuan Yew. But such concerns haven't dissuaded two Americans with deep foreign-policy rsums from seeking Lee's counsel on US-China relations.

Graham Allison, of Harvard University's John F. Kennedy School of Government, and Robert Blackwill, of the Council on Foreign Relations, have co-written the recently published Lee Kuan Yew: The Grand Master's Insights on China, the United States, and the World. The book is based on the scholars' conversations with Lee as well as his many public speeches.

The book covers a wide range of topics, but its third chapter is devoted to China-US relations. Lee, whose 31-year reign as Singapore's prime minster ended in 1990, resolutely dismisses the idea of a Cold War-style standoff between the two nations.

"The Soviet Union was contesting the US for global supremacy. China is acting purely as China in its own national interests. It is not interested in changing the world," says Lee, who is described in the book's foreword by former US secretary of state Henry Kissinger as a man of unmatched intelligence and judgment.

Lee says in the book that, in contrast to US-Soviet relations, there is no irreconcilable ideological conflict between the US and a China that has enthusiastically embraced free markets.

He considers bilateral ties to be both cooperative and competitive, and says that while competition between the two nations is inevitable, conflict is not.

However, Lee detects some uncertainty. The best possible outcome, he says, is a new understanding that when they can't cooperate, China and the US will coexist and allow other countries in the Pacific to grow and thrive.

Lee believes the fact each nation requires the other for cooperation and healthy competition will be a stabilizing factor as their relationship continues.

He considers the risk of military conflict between the two giants low.

"Chinese leaders know that US military superiority is overwhelming, and will remain so for the next few decades," says Lee. He adds that China will modernize its forces not to challenge the US, but to increase its own influence in the Asia-Pacific region.

Lee welcomes the US military presence in the region, arguing that it helps ensure stability, which serves the interests of all, including China.

For the US to be displaced - not in the world, but in the western Pacific only - by an Asian nation long dismissed as decadent, feeble, corrupt or inept is hard for Americans to accept, according to Lee.

"The sense of cultural supremacy of the Americans will make this adjustment most difficult," he says.

He believes the long success of the United States isn't due to particular ideas or principles, but rather geopolitical good fortune, an abundance of resources and energetic immigrants, inflows of capital and technology from Europe, and two oceans that have kept conflicts away from US shores.

"The US cannot stop China's rise; it just has to live with a bigger China, which will be completely novel for the US as no country has ever been big enough to challenge its position. China will be able to do so in 20 to 30 years," says Lee, who is now 89 and retains the title of minister mentor of Singapore.

Like other strategic thinkers including the Kennedy School's Joseph Nye, Lee believes if the US tries to humiliate China and keep it down, it will assure itself an enemy. If instead it accepts China as a big, powerful, rising state and gives it a seat in the boardroom, China will take that place for the foreseeable future.

"You cannot say you will engage China on some issues and isolate her over others. You cannot mix your signals," says Lee, who most recently had the unique title of minister mentor of Singapore.

"If I were an American, I would speak well of China, acknowledge it as a great power, applaud its return to its position of respect and restoration of its glorious past, and propose specific concrete ways to work together. I have no doubt that this generation [in China] wants a peaceful rise."

US main source of hacking against China

Less is more for government